Over the past two weeks, the host broadcaster announced that, during the World Cup matches, volleyball recorded 10-12% of the total TV audience. In addition, the women’s 2019 FIVB World Cup recorded sold out stadiums for all of Japan’s matches, and at least 75% capacity for all other afternoon fixtures.

“The FIVB Women’s Volleyball World Cup was a great success and so many fans were able to watch the matches, both here in Japan and all around the world.

“Fan engagement remains a key priority for the FIVB. The relationship with Fuji TV is an exciting development for volleyball and I look forward to working closely with them in the future.”

“As a long-time host broadcaster of the FIVB Volleyball World Cup, we are delighted that the ladies’ event finished successfully, and I would like to take this opportunity to congratulate all the teams for a fascinating tournament.

“With other major sports events taking place, four of the Volleyball World Cup matches that were broadcasted in prime time from Fuji Television ranked in the top five sports telecasts, so we are quite satisfied with the ratings.

“We are very happy to work with the FIVB and the JVA, and we look forward to continuing our partnership for many years to come.” 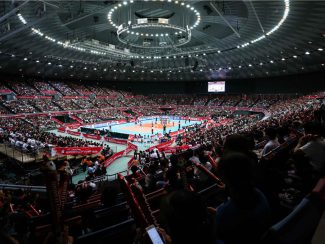