Seconds after beating Bulgaria in the final of the 2021 FIVB Boys’ U19 World Championship, Poland gather to celebrate their success.

Poland shut out Bulgaria 3-0 (25-20, 25-19, 25-19) to strike gold at the 2021 FIVB Boys’ U19 World Championship which wrapped up Thursday evening in Tehran after ten glorious days during which 18 countries showcased the future generations of volleyball stars.

Earlier in the afternoon at Tehran’s Azadi Hall hosts Iran had defeated Russia 3-2 for the bronze medal.

It was Poland’s second gold medal in the history of the competition, after their success of 2015. They have also won two bronze medals, in 1999 and 2013. 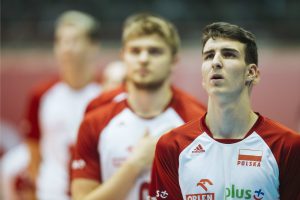 Throughout this 2021 edition they have scored seven wins on the trot, remaining undefeated and having dropped just one set (in the semifinal against hosts Iran).

Poland set the pace from the very start of the final with yet another solid and well-rounded performance and though Bulgaria tried to keep in touch in the score the Poles kept healthy leads throughout the match to wrap it up in straight sets with relative ease.

Bulgaria had already gone above and beyond what would ever have been expected of them, when they spectacularly knocked out defending champions Italy in the quarterfinals and three-time world champions Russia in the semis.

Poland proved too hard a nut to crack for the plucky Bulgarians, but this is still their best finish ever in the competition and a reappearance on the podium after 32 years, since a bronze in the inaugural edition of 1989.

Brazil grabbed 7th place after dealing with Germany’s very tough resistance for a 3-1 (25-17, 23-25, 26-24, 26-24) victory – but the European side proved very generous in gifting the South Americans as many as 39 points from unforced errors. Brazil’s best scorer was Samuel de Morais on 14 points but the match high of 17 came from Germany’s Joscha Kunstmann.

Both Colombia and Cuba forfeited their match for 15th place, due to early departures from Tehran, and rank joint 15th.

Earlier in the competition Belarus had claimed 17th place, leaving Cameroon in 18th. Guatemala and the Dominican Republic who never travelled to Tehran due to coronavirus cases ranked joint 19th.