Good news for fans of the Iranian setter

Weeks after his brief announcement of his withdrawal from the national team – the day after Iran exited the preliminary round of the Tokyo 2020 Olympic Games – Saeid Marouf has announced he will continue his involvement in the sport and his club career. “I chose to continue my activities in various fields of volleyball while playing in club teams because I do not intend to be separated from volleyball at all,” Marouf wrote in his message on Instagram. The 35-year-old superstar setter felt he owed it to his fans to explain his decision after announcing his retirement from his national team career three weeks ago.

“After a few weeks of my last stint with the national team, I thought it was necessary to explain a few points to the volleyball fans.

“I can assure all my loved ones that my decision to say goodbye to the national team was not an irrational decision out of emotions, but rather a decision where all aspects have been considered for a long time and finally implemented. And by all means, it was not an easy decision for me.

“I wish I could summarise all these years for you, but I do not know if it is possible to write 20 years of sports activity in different age categories in a few lines.

“My love for volleyball was so much that love alone could reduce the difficulty of this journey throughout these years and it has kept me happy. But most important of all was the love that you gave to volleyball and how it provided motivation. I could only think of the goodness and the pleasures of this journey, and I will cherish these memories that you have created for years to come.” 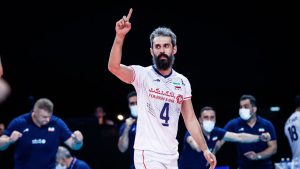