Iran celebrate their 7th medal in the history of the Boys’ U19 World Championship as they take down Russia for bronze.

Iran’s win denies Europe a clean sweep of the podium – which has yet to happen in the history of the competition.

Russia are left without a podium finish for the first time since 2013.

It was a close first set until 10-10, but then Iran broke away and breezed through to a 1-0 lead.

Though certainly more enthusiastic and passionate, Iran allowed Russia to open up a six-point lead at 18-12. But when the hosts reacted it was a bit too late and although they drew level at 20-20, Russia took the set with back-to-back attacks from Kirill Vlasov who denied them the sideout and then finished off set point.

It was close again in the third, until Russia broke away after 18-18 for a three-point lead. Russia reached set point with two to spare, at 24-22, but Iran drew level after taking the sideout with an attack by Yousef Kazemi followed by a rotation error by the Russians.

And after another cancelled Russian set point, a monster block by Erfan Norouzi on Mikhail Labinskii followed by a breathtaking dig by Arshia Behnezhad and an unopposed second-touch super-spike by Younes Javan, clinched the set for Iran.

Iran attempted to stage a comeback after trailing 22-19 in the fourth, closing in at 22-21, but Russia regrouped and responded with a three-point run to force a tie-break.

But Iran came into the fifth more determined, fighting for every ball, and very quickly shot off to a six-point lead by an astonishing 11-3 – Yousef serving eight times on the trot in their 7-0 run. Russia would never recover from the deficit as Iran carried on for the historic win – Erfan stuffing Mikhail Labinskii for the last point and sending his teammates and team staff into a frenzy of celebrations. 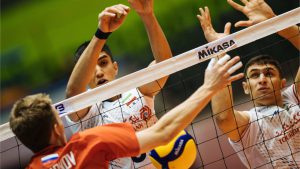 Amir Golzadeh and Yousef Kazemi block Russia’s Timofei Tikhonov as they lift Iran to bronze medal at the 2021 FIVB Boys’ U19 World Championship in Tehran.

A scoring performance of 18 points by Poriya Khanzadeh, which includes five of his team’s nine aces, carried Iran through, but it was more the fighting spirit of the home side and the determination to chase every ball and keep it in play that proved key.

Timofei Tikhonov was top scorer of the game on 23 points and Kirill Vlasov added 21, with Vasilii Tarasenko taking down six stuffs. But with a mere 43% attacking efficiency (57/132) and 41 unforced errors Russia were never going to win this match – it’s actually a wonder how they managed to take it to five sets.

“It’s always good to finish a tournament with a victory – but it’s a pity that it could not earn us the gold medal,” said Iran head coach Masoud Armat after the game. “I dedicate this victory to the people of Iran.”

“Our players are young and inexperienced,” explained Russia coach Maxim Maximov. “But I promise volleyball fans that we will gradually get the team to a better position with more intensive training and better planning. Our plan was to get on the podium and win a medal, but in the end being amongst the top four teams in the world is not bad.”