The Grimalts captured the golden spot on the podium, following their 2-0 (21-18, 21-12) triumph over Italian pair Enrico Rossi and Adrian Carambula.

The Chileans overcame their opponents’ quickness and the good service game to win the opening set and then applied more pressure on the Italians with great net defence and aggressiveness on the attack in the second frame.

“They served well at the beginning,” Esteban said. “It was hard to set up our offence because of that, but we handled it well towards the end of the first set. It became easier for us to finish each play with a point. We knew they played with a quick tempo, so we had to adjust by also being quick on sideouts and by passing accurately.”

The Chilean fans at Manly cheered their team, which won their first medal in the World Tour this season – a follow up to the gold medal win at the World Tour 3-star event in Tokyo last July 2018.

“We knew there’s a big Chilean community here in Sydney,” Esteban said. “So they made a big announcement on social media that we are competing here. We felt like locals in the end. We played with a good atmosphere from start to finish.”

Stafford Slick and William Allen of the United States won the bronze medal by forfeit due to injury in the French tandem of Youssef Krou and Edouard Rowlandson. Krou suffered a shoulder injury during semifinal play against Chile’s Marco and Esteban Grimalt. 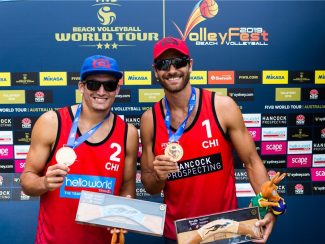