Earlier on Sunday afternoon, Turkey’s Fenerbahce Opet Istanbul had crushed Brazil’s Itambe Minas Tenis Clube Belo Horizonte 3-0 (25-18, 25-7, 28-26) in the bronze medal match for an all-European sweep of the podium (just like in 2019).

VakifBank denied Conegliano back-to-back titles, as they went for the fourth of their own following their success in 2015, 2017 and 2018. 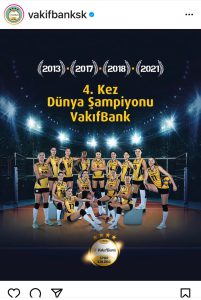 It was only the second time in the history of the competition that the title was decided in five sets, after Eczacibasi VitrA Istanbul edged Pomi Casalmaggiore in 2016.

Some brilliant distribution of play by setter Cansu Ozbay (in addition to the pressure she applied from the service line and a star performance in the middle by USA’s Chiaka Ogbogu (four blocks and 11/15 for 73% in attack) complemented the high scoring of 28 by Haak as VakifBank prevailed in the final.

With fewer solutions available for Conegliano setter Joanna Wolosz, Paola Egonu got to deliver 62 swings and registered the match high of 35 points, for the only 30+ scoring performance of the tournament, but Conegliano’s star opposite failed to deliver when it counted most – in the tie-break as the Italian side sturggled to keep up with VakifBank.

The all-time record in the history of the competition remains at 38 points, held by Egonu herself from that amazing 2019 semifinal against VakifBank in 2019.

Coach Giovanni Guidetti was quick to praise and thank the spectacular partisan crowd for their support.

“It was special to win this trophy in front of these amazing people,” he said after the match. “But I also want to thank my players and staff, because to beat a team such as Conegliano you have to play extra great.”

Gabi Guimaraes, who as usual was a constant source of reliability and stability both in front and in the back, also raved about the support of VakifBank’s fans. “Thank you, you are the best,” she said directly to the crowd on court immediately after the game. 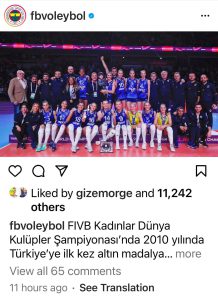 A dazzling performance by 17-year-old Arina Fedorovtseva of Russia boosted Fenerbahce in their sweep of Minas – though they were made to work for it in the third set, taking them three match points to get the job finished (while cancelling one set ball of their opponents in the process).

Fedorovtseva bagged the match high of 21 points by a long shot – the next best scorer being her teammate and fellow Russian Anna Lazareva with 12.

An eleven-point run from 10-4 to 21-4 in the second put the set beyond the reach of the Brazilian champions who conceded the only single-digit score of the tournament.

At 17 minutes it was also the quickest set in the history of the competition (since the introduction of the rally scoring system), beating the previous record by one minute (though it’s one over the score record of 25-6 by Volero Zurich over Kenya Parisons in 2013).

It was the third medal for Fenerbahce in the history of the competition, after they claimed gold in 2010 and bronze in 2012.

“I’m very happy – it’s not a small thing to win a medal in a World Club Championship,” said Fenrbahce coach Zoran Terzic after the bronze medal match. “We are a new team with a lot of young players and this is a great start at this time.”