Bangkok, Thailand, February 20, 2019 – The AVC Referees Committee members gathered at the Dusit Princess Srinakharin Hotel here for a productive two-day meeting to review the completed tasks the year behind and more difficult things to be done one year ahead.

AVC Referees Committee Chairman Mr Songsak Chareonpong, himself one of the FIVB Rules of the Game and Refereeing Commission members, chaired the Tuesday-Wednesday meeting, with 10 members in attendance including Committee Secretary Mr Takashi Shimoyama. Members reported, exchanged ideas and shared their working experience when they had been nominated for officiating at 2018 AVC Championships as Referee Delegates and Referee Sub-Committee Members.

The meeting started with an approval of the Minutes of the previous AVC RC Meeting on February 26-27, 2018, while further information on the AVC RC annual report to FIVB for the 2018 Volleyball-Beach Volleyball was also brought for awareness and general understanding of the members.

During the meeting, Mr Songsak informed the Committee members of the recent FIVB Rules of the Game and Refereeing Commission Meeting, which discussed preparations for the next Olympic Games as well as other key FIVB events including the VNL. The Commission Meeting, he said, brought the continuous importance of introducing new technology and maximising the Challenge System as the FIVB works hard to ensure the fairness of the game for the benefit of all athletes. 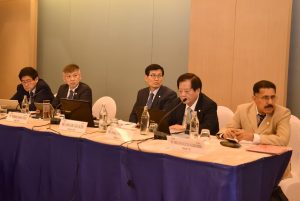 According to the report in the Commission Meeting, during the 2018 FIVB Volleyball World Championships, the Challenge System showed great results with 430 challenges requested during the women’s edition (157 successful, 37% success rate), and 586 challenges requested during the men’s tournament (237 successful, 40% success rate). Earlier this year, the Volleyball Nations League showed similarly positive results, with a 41.95% success rate in the women’s edition, and just under 40% in the men’s.

Committee member Mr Thongmas Chang later informed the meeting about the AVC Beach Refereeing Report 2018, mentioning that there were a total of 87 BV International Referees by national federation in 2018, with China having the biggest number of 11 referees and Thailand 10. He also talked about the distribution of BV International Referees by Gender and Distribution of Referees by Zone in comparison between 2017 and 2018 as well as the status of refereeing in 2018.

Furthermore, reports on the AVC Refereeing Courses in 2018 which consisted of the ARCC in Bangkok, Thailand from September 5 to 11 and the ABRCC in Bangkok between October 1 and 7 were also brought for further consideration as well as the AVC Refereeing Courses due to be organised in 2019 comprising ARCC in Kuwait from March 3 to 9, ARCC in Tainan City, Chinese Taipei in November and another ARCC course in Sri Lanka.

Additionally raised for necessary information and discussion among the Committee members was the 2020 Volleyball Elite Referees Course. Since the FIVB decided to focus on the development of referees who can handle the very toughest matches, there has been a need to identify and educate referees who can be taken to this level of performance.

Crucial in ensuring the high quality of the refereeing and making sure the rules of the game are constantly updated to keep up with innovation and maintain spectator appeal, the AVC RC Meeting also discussed about the Asian Refereeing Course regulation in both volleyball and beach volleyball events and the information of the AVC Video Challenge System and regulation.

“The Referees Committee are committed to introducing new technology on court and preparing our referees as well as possible before our biggest events which include six Asian Championships and Asian Beach Volleyball Tours to be contested this year,” said Mr Songsak.