Lausanne, Switzerland, October 29, 2020 – History was made this week as Morocco’s Bouchra Hajij and Indonesia’s Rita Subowo became the first-ever women to lead the African and Asian Continental Confederations respectively.

Both Bouchra Hajij and Rita Subowo, who are also FIVB Executive Vice-Presidents, have showcased their dedication to developing volleyball worldwide throughout their careers. Hajij, a former Morocco women’s national volleyball team player from 1986 to 2002, has led the Royal Moroccan Volleyball Federation since 2014 and served as a CAVB Executive Board Member since 2015.

In addition, since 2015, she has been a member of the International Olympic Committee (IOC) Culture and Olympic Heritage Commission, and also joined the Association of National Olympic Committees of Africa’s (ANOCA) Gender Equality Commission earlier this year. During yesterday’s CAVB Electoral Congress, Hajij convincingly won the Presidential election, earning 77.78 per cent of the votes from CAVB’s 54 National Federations.

“I am delighted to be able to lead our Continental Confederation, and I am committed to ensuring the ongoing development of volleyball in our region with the FIVB’s support. To become the first-ever female President of the CAVB is a wonderful achievement and a sure sign of the incredible progress that has already been made in regards to gender equality within our sport,” said CAVB President Bouchra Hajij.

The AVC’s newly elected President, Rita Subowo, previously led the National Volleyball Federation of Indonesia, and has served as an AVC Executive Vice-President since 2015. Outside of volleyball, Subowo served as the Indonesian Olympic Committee President and an IOC Member from 2007 to 2015. She is also an integral member of the Olympic Council of Asia (OCA) and was named an OCA Honorary Vice-President in 2019.

“The trust that the AVC’s National Federations have bestowed upon me is incredible and gives me confidence. I know that, united, the AVC will be unstoppable in its mission to grow volleyball across Asia so that more and more people can enjoy our sport. Volleyball is my life, and I will continue to dedicate my life to this sport.”

“I am honoured to welcome our first-ever female Continental Confederation Presidents to the global Volleyball Family. Volleyball is a gender balanced sport by nature, and the FIVB is committed to ensuring that women are represented both on and off the field of play. This marks an incredible milestone of progress, not only within our beloved sport, but also in the wider global sports community.

“Both Mrs Hajij and Mrs Subowo have extensive experience within volleyball and sports administration, and I have no doubt that they will further both gender equality in sport and the development of volleyball worldwide.”

The FIVB is committed to creating a level playing field for both women and men, whether on the court or within the governance of the organisation. For example, the Volleyball Nations League (VNL), which debuted in 2018, offers equal prize money for both genders with the number of matches and the event format also the same.

MARANO INSPIRES WITH STORY OF TRIUMPH OVER ADVERSITY 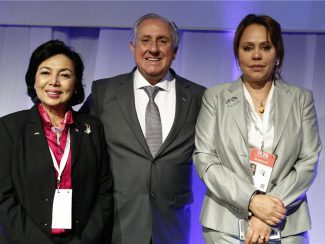