HODGES AND SCHUBERT GOING FOR GOLD SATURDAY IN ELITE 16 FINAL 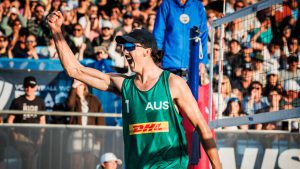 Hodges and Schubert reached heights they had never seen before as they defeated the Italian team of Alex Ranghieri and Adrian Carambula in an epic three-setter to qualify for their first ever Beach Pro Tour Elite 16 gold medal match.

The decider was a thriller that kept the Torquay crowd on the edge of their seats as the two teams kept exchanging blow for blow in overtime, until the Aussies closed out the set 21-19.

“It’s unbelievable and to do it in front of friends and family it’s a once in a lifetime experience,” said Hodges, a Victorian local who feels right at home in Torquay.

“All year I’ve been excited for this event. I come down to Torquay and Jan Juc all the time, when I get time off in Melbourne. To get to play an event here and then to make it a final, I’m speechless,” he said.

Qualification to the semifinal had been somewhat bittersweet for Schubert, who was supposed to be the best man at one of his best friends’ wedding on Saturday. Now the young Aussie will play for gold instead.

“I was in a completely different mindset after our last game, it was a very happy, but disappointing feeling.

“I called my mate straight after [the quarter final] and everyone was super disappointed, but at the same time everyone understood. It’s just such a weird time. I’m just happy we performed, did well and made the most of it.

“Everyone [the crowd] is coming out and getting into it.  Beach Volleyball is such a great game, that’s why we play it, so it’s really great to see the crowd get behind us.”

Earlier in the day, Hodges and Schubert produced the biggest upset of the day winning in straight sets in the all-Australian quarter final that saw them take on Commonwealth Games champions and top seeded side Chris McHugh and Paul Burnett. 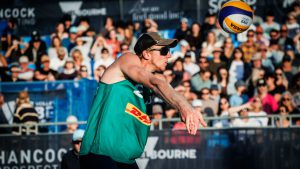 On Saturday, in the men’s Final, Hodges and Schubert will face the French duo of Youssef Krou and Arnaud Gauthier-Rat, whom the Aussie duo already defeated this year at the Beach Pro Tour Dubai Challenge event.

“It was a close three setter that we won and so they will be looking for vengeance. But we are ready to bring it again,” Hodges said.

In the women’s semifinals, No.1 seed Taliqua Clancy and Mariafe Artacho del Solar fought valiantly against the inspired American pair of Betsi Flint and Julia Scoles.

The Americans put pressure on the Aussies right from the start, confidently taking the first set. Despite fighting tooth and nail to come back into the match until the very last point of a nail-biting second set, Clancy and Artacho del Solar were defeated in straight sets (15-21, 25-27).

In the Saturday afternoon, the two Aussies will play another American partnership, Kristen Nuss and Taryn Kloth to try and claim a bronze medal in front of a home crowd.

Later in the evening, Flint and Scoles will go against No. 2 seed Kelly Cheng and Sara Hughes in an all-American gold medal showdown for the crown of the women’s Torquay Elite 16 title.