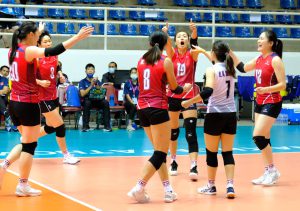 After a fantastic comeback 3-2 win against Uzbekistan in their opening clash on Friday, Malaysia hoped high to repeat the similar feat in their second encounter against Hong Kong, China, which went down in straight sets to hosts Thailand the previous day, but had to leave the competition site with heads low in disappointment after 0-3 loss to the Hong Kong girls. 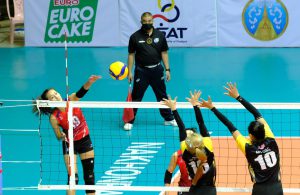 As the 184cm-tall Low Mei Cing spearheaded the Malaysians, Hong Kong, China fielded more individual talents including Chim Wing Lam and Pang Win Lam. The first set was dominated by Hong Kong, China with Pang and Chim too powerful from spike range and the Malaysians were caught flat-footed for several times. Leading 14-11, Hong Kong, China held firm, leaving the rivals unable to break their impeccable defence. Hong Kong, China moved ahead 24-18 when a spike from Malaysia went wide and they went on the good show to win the set 25-18. 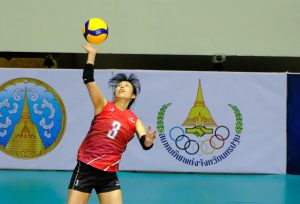 The second set was similar script when Hong Kong, China were back in control, with Chan Ming Wai, Chim and Pang joining forces in penetrating the Malaysian defence with their attacks and effective drop shots to race to an initial 18-13 lead. The Hong Kong girls did not look back after that, notching crucial points to win the set 25-16. 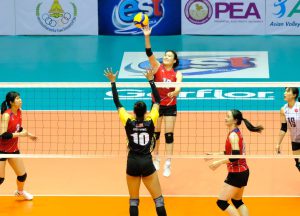 Hong Kong, China maintained their winning way to waltz into 7-4 lead in the third set, while Malaysia tried their best, hoping to regain their composure. They showed tremendous courage and defensive resilience and it seemed their attempts paid their dividends when they managed to narrow the gap 11-12, forcing Hong Kong, China head coach Kwok Kin Chuen to request for a timeout for his well-trained side and it appeared to do the trick with the Hong Kong girls coming back and stretching it to 20-12. 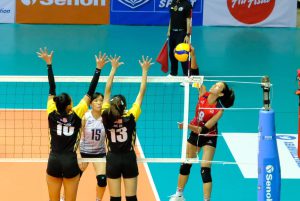 As Malaysia were beginning to make errors, Hong Kong, China found themselves seven points clear at 22-15 with some dazzling volleyball. But Malaysia were just never-say-die and came out with gutsy display. They attacked powerfully and blocked effectively to win several points to close the margin 23-23 and from then, the on-going battle became more thrilling as both sides battled hard to take the set. Still, Hong Kong, China had enough in their tank to eventually capture the hard-fought set 30-28 and match. 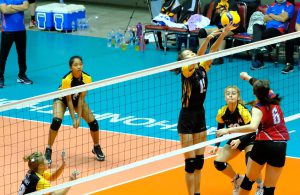 Chim Wing Lam chipped in with 15 points from 14 attacks and one ace for Hong Kong, China, while Low Mei Cing scored a match-high 19 points including 18 attacks for Malaysia. 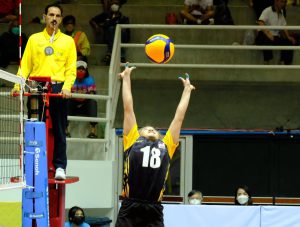 Hong Kong, China will next take on Singapore, while Malaysia, fifth place at the recent Vietnam-hosted 31st Southeast Asian Games, will go up against India