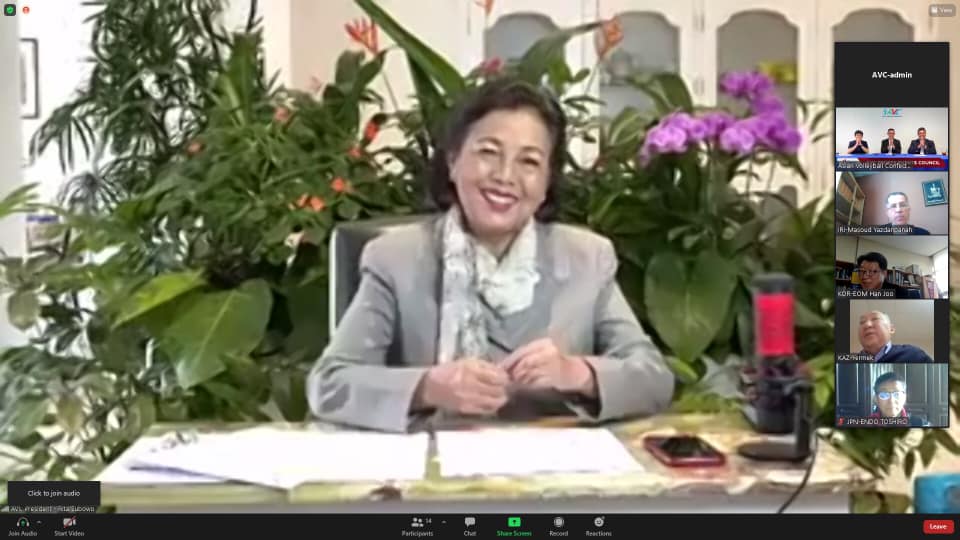 AVC President Mrs Rita Subowo delivered a welcome speech, citing that she was happy to learn that all members stay safe and healthy. She informed the meeting that last year was so difficult that AVC had to cancel activities and competitions.

“This meeting is very important because we have to plan for future of our AVC through the competition organising committees, national federations and particularly the sponsorship that will support us on this matter. This is not easy for us but I really do hope that with our unity and Asian Solidarity as well as respective plans and ideas, I believe that we can organise better than last year,” Subowo said.

“Please feel free to propose or do whatever you think that this is good for AVC this year and the future. For most organisers, I would like to thank them, especially during this difficult time for their commitment to make a competition and continuation for support and cooperation. This year, we have the Olympic Games in Asia, while next year we will have the Winter Olympics in Beijing and the Asian Games in China almost at the same time. Certainly, we will have a lot of things to do for Asia. I wish you good results in this meeting. This is very important for AVC to step up for the future, and we should start from this year.”

AVC Secretary General Mr Kiattipong Radchatagriengkai said he was very happy to work with all members. He welcomed them to the meeting and wished them a success. 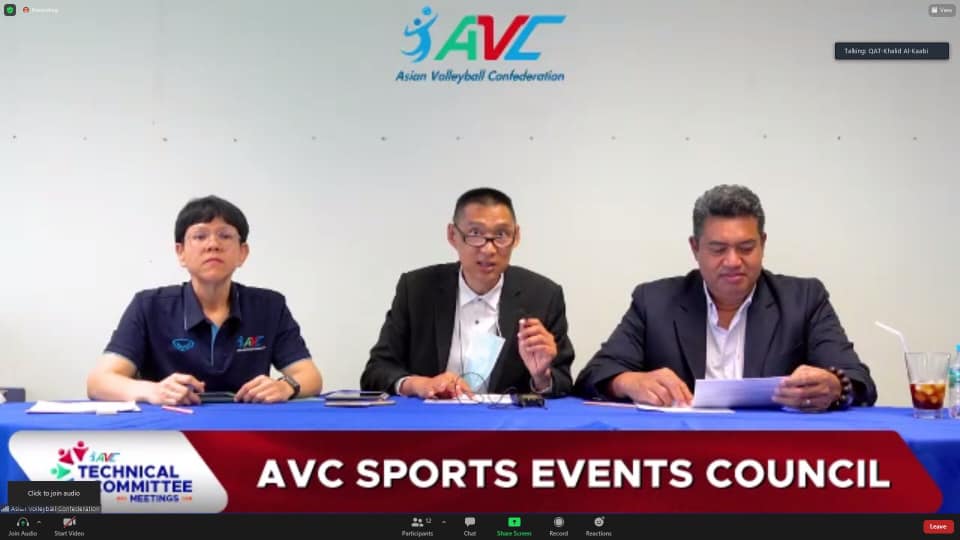 After that, AVC Executive Director Mr Shanrit Wongprasert informed the meeting that this year is very important for all because AVC expects to get the competitions back to normal as soon as possible.

“Staffs at the AVC Headquarters in Bangkok tried hard to catch up with situations and the FIVB’s updated information in order that we can start our activities. Next year, the AVC schedule will be very busy as mentioned by AVC President. We will have the Asian Indoor and Martial Arts Games in Thailand and the Asian Beach Games in China. So, the competition calendar next year will be very tight. I suggest that SEC carefully study those events and try to avoid the clash of competitions. For AVC events, we have Club Championships, four Underage Championships plus multi-sport games. All SEC Members may be loaded with tons of hard work. However, I sincerely wish SEC the very best success and we, AVC Headquarters staffs, are here to support all of you,” Shanrit said.

Many SEC Members are newcomers and they, therefore, made a good impression with self-introduction speech with career backgrounds. 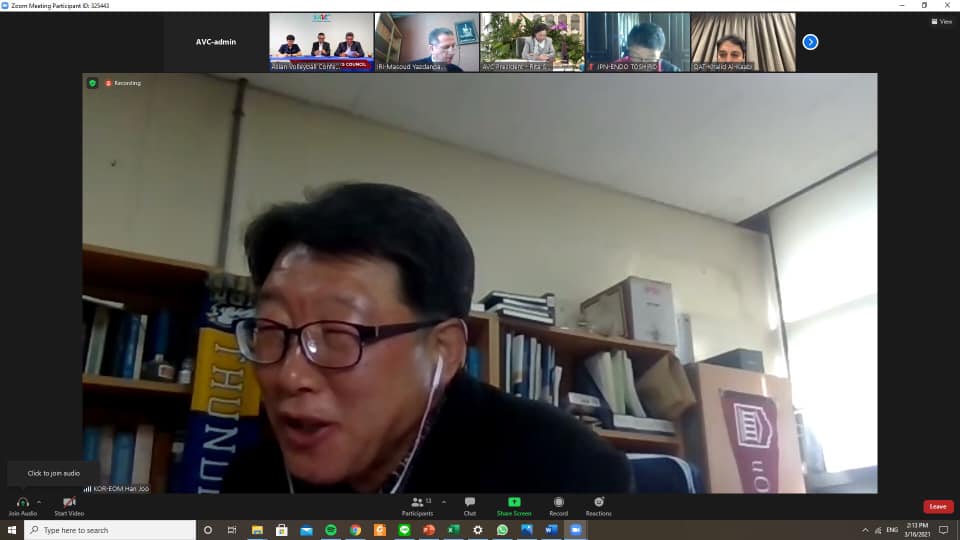 The meeting then acknowledged the 2020 Minutes of AVC SEC Meeting in Bangkok and heard the reports of cancellation of all 2020 AVC Championships. Dr Eom reported that only the AVC Men’s Tokyo Qualification 2020 in Jiangmen, China and the AVC Women’s Tokyo Qualification 2020 in Nakhon Ratchasima, Thailand had been held, with eventual winners Iran and Korea making the cut for the Tokyo Games.

Focus on monitoring progress towards the next stages of the AVC events in 2021 was also raised for further consideration and discussion. 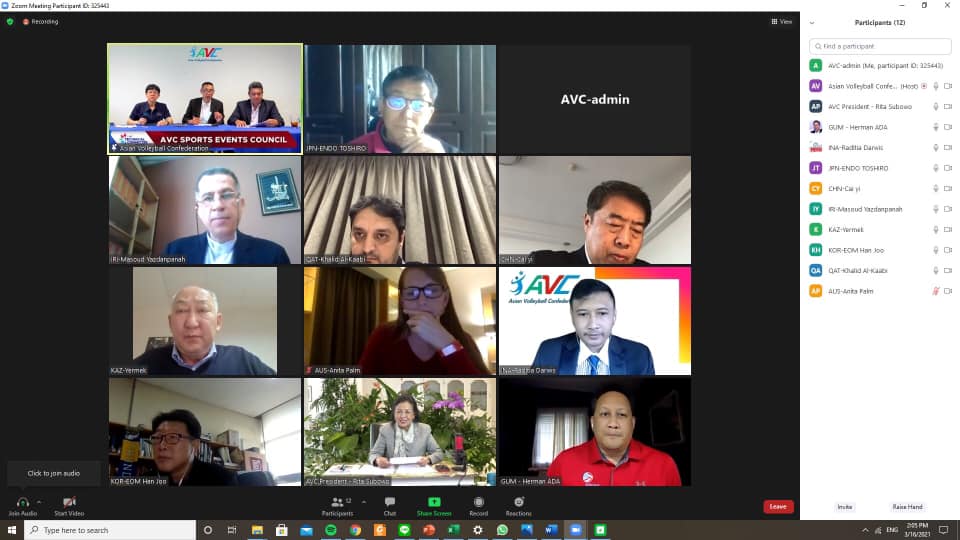 Shanrit informed that AVC has already sent the competition dates and details of the mentioned Asian Championships to FIVB for approval and after this, AVC will work closely in all aspects with host countries to make the afore-mentioned tournaments happen, especially expenses occurred from unexpected circumstances.

Regarding the AVC Cup matters, Mr Masoud Yazdanpanah said that since participating countries always send their second-string squad to the AVC Cup tournament and he came up with an idea that top two teams from each zone be qualified for the tournament. However, the other member reasoned objection that among Arab countries, it’s very difficult to look for well-qualified teams to represent their zone in the AVC Cup for Women.

“Since we need marketing policy for all competitions which receive subsidies from AVC, further consideration should be made on the qualification criteria and process for teams to participate in the AVC Cup,” Shanrit suggested.

He added that some certain Asian countries can host and contest the inaugural Asian Snow Volleyball Championship and this ground-breaking event will help Asian volleyball players to sharpen their skills in playing snow volleyball in order that they can later participate in FIVB-sanctioned world-class snow volleyball competitions in the near future.

“As we talked and discussed earlier, we found that Kazakhstan has all elements necessary for hosting the Asian Snow Volleyball Championship and if they are willing to continue, I’m upbeat that they will be successful. 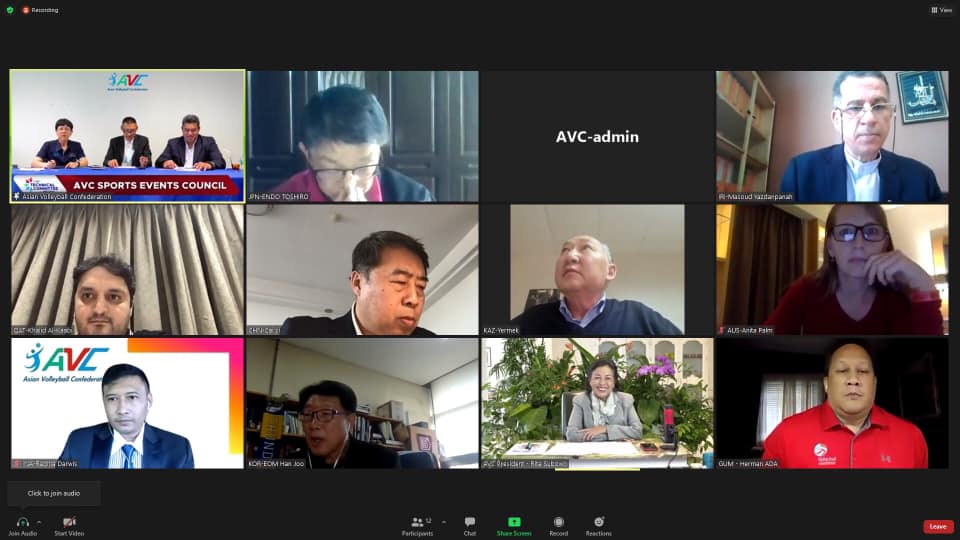 The preparatory reports on AVC events in 2022-2024 have also been raised for consideration in terms of candidate countries, while the 2021 AVC Competition Formats, new world ranking system and extra members for composition of the team delegate in the AVC Championships had also been acknowledged during the meeting.

At the end, AVC President Mrs Rita Subowo expressed her satisfaction over a fruitful outcome of the AVC Sports Events Council Meeting, saying that although in difficult situations, the SEC Members’ corroboration made a big difference and she was proud of them.

“I’m very happy today that we can make a successful meeting and I am proud of you. Stay safe and healthy during COVID-19 pandemic. We will meet each other again next time. Thank you, everyone,” Subowo concluded.