Manila, Philippines, October 3, 2019 – The second leg of the 2019 ASEAN Grand Prix, which will serve as the Philippine Southeast Asian Games Organising Committee (PHISGOC) volleyball test event, will be held at Sta Rosa Sports Complex from October 4 to 6, 2019.

World No.14 and perennial SEA Games champions Thailand, which recently captured the first-leg ASEAN Grand Prix title at Terminal Hall on home soil in Nakhon Ratchasima, will renew rivalries in the single round-robin competition with Indonesia, Vietnam and hosts Philippines.

Thailand sent a strong 14-player roster to defend their AGP title. Ace spiker Onuma Sittirak, who landed the MVP award at the first leg, leads the charge for Thailand, strengthened by veterans Pleumjit Thinkaow, Wilavan Apinyapong and Malika Kanthong. Young talents including hard-attacking Chatchu-on Moksri, who took the Best Spiker award at the first leg, and Pimpichaya Kokram, who scored a match-high 25 points to power Thailand to a 3-2 win against Korea at the last year’s FIVB Volleyball Women’s World Championship in Japan, have been regarded as major forces to be reckoned with.

Indonesia, silver medallists at the previous SEA Games volleyball competition in Malaysia two years ago and also second place at the first leg of the AGP, were spearheaded by team captain Amalia Fajrina Nabila and two dominant players Megawati Hangestri Pertiwmi and Tri Retno Mutiara Lutfi, who clinched the respective Best Setter and the Best Server awards at the previous leg.

Tall, powerful Tran Thi Thanh Thuy will miss the cut for the Vietnamese side this time. Veteran Bui Thi Nga will lead the team as captain, while hosts Philippines will be strengthened by powerful Alyssa Valdez, who did not compete at the first leg.

Among the four participating teams, only Thailand and Indonesia have already qualified for the AVC Continental Olympic Qualification Tournament, which is due to take place in Nakhon Ratchasima, Thailand between January 7 and 12, 2020.

In the recent first leg at Terminal 21 Shopping Mall in Nakhon Ratchasima, hosts Thailand made a clean sweep with three straight wins to reign supreme. They pulled off a comfortable straight-set win against Vietnam, but struggled to similarly beat the Philippines and Indonesia in thrilling four sets.

Indonesia claimed second place with two wins against one loss. Their encounter against the Philippines turned into a hard-fought thriller where the Indonesians edged past the Filipinas in terrific tie-breaker.

The Philippines came in third place with one win against two losses. Going down 2-3 to Indonesia and 1-3 to Thailand, the Philippines came up much stronger in their third match against Vietnam, which they won in close battle 3-2. 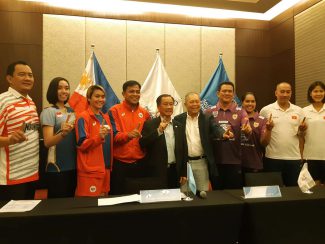