Bandar Torkaman, Iran, October 3, 2019 – A year after failing to have a team break through to reach the semifinals in the Bandar Torkaman event, Thailand’s Nuttanon Inkiew and Sedtawat Padsawud secured a spot for the Southeast Asian country here Thursday in the final four at the FIVB World Tour tournament.

Seeded third in the US$5,000 Bandar Torkaman event, the pair reversed Thailand’s fortunes in the FIVB competition by posting a 2-1 (11-21, 21-18, 15-13) quarterfinal win in 43 minutes over 16th-seeded qualifiers Peiman Dargahi/Vahid Nikoufar of Iran to reach their third World Tour semifinal.

With the win, Nuttanon/Sedtawat remain in contention to win their second FIVB gold medal after the pair topped a World Tour podium in April 2018 on home sand in Satun for Thailand’s first-ever title on the international beach volleyball circuit.

In the inaugural Bandar Torkaman competition last October, Dunwinit Kaewsai and Narongdet Kangkon reached the quarterfinals before the Thailand pair were eliminated by eventual champions Bahman Salemi and Arash Vakili of Iran 2-0 (21-19, 21-14) in 37 minutes.

Nuttanon/Sedtawat will play Hitoshi Murakami/Takashi Tsuchiya in Friday’s second semifinal match as the fourth-seeded Japanese pair advanced to the Bandar Torkaman final four with a 2-0 (21-16, 21-16) win in 46 minutes over 10th-seeded qualifiers Bahman Gholipoury/Aghamohammad Salagh of Iran.

Friday’s first semifinal match is an all-Iranian affair with the top-seeded Salemi and Vakili meeting 12th-seeded Alireza Aghajani/Javad Firouzpourbandpei. While the teams Nuttanon/Sedtawat, Salemi/Vakili and Murakami/Tsuchiya are each appearing in their third World Tour semifinal with a combined 43 international starts, Aghajani/Firouzpourbandpei are competing in their first-ever FIVB event together.

Following the morning semifinal matches, the two winning teams will meet in the afternoon medal rounds where the victorious team will share the $1,000 first-place prize along with collecting 200 points towards qualifying for the Tokyo 2020 Olympic Games.

Nuttanon/Sedtawat are currently listed 27th on the Tokyo 2020 Olympic provisional ranking list with the top 15 pairs with a maximum of two teams per country securing a spot in next year’s Summer Games.  Salemi and Vakili are one event short of being ranked on the provisional list as 12 appearances at FIVB World Tour and/or continental championships are needed to qualify for the ranking. 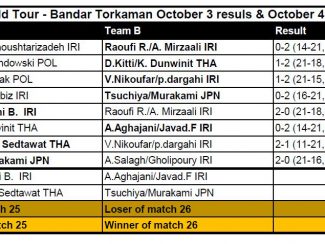 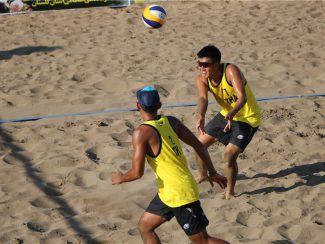