Nakhon Pathom, Thailand, June 24, 2022 – In-form India got their campaign in the “21st Princess Cup” 3rd AVC Women’s Challenge Cup off to a brilliant start with comfortable straight-set 25-16, 25-19, 25-8 win in their first match against Singapore in the single round-robin tournament at Nakhon Pathom Sports Centre Gymnasium on Friday. Led by hard-attacking Saranya N.S and captain Nirmal, India made a superb start to lead 12-9 in the first set. However, Singapore improved on their reception and attacks to catch up with the well-trained rivals. With Thai head coach Suntorn Phoseeta roaring on his players from the courtside, Singapore found their rhythm to hit back with more aggressive attacks and narrowed the margin 12-14. However, India, which had started their training stint since the beginning of May in preparation for this Challenge Cup, maintained their tempo and roared back with powerful attacks from Nirmal and Anushree K.P, allowing the Singaporeans only two more points to wrap up the comfortable set 25-16. 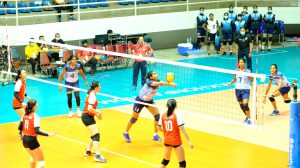 Both sides started strongly in the second set to trade attacks from the very beginning which saw scores level at 7-7 and 11-11, but shortly after that, India gained the upper hand and attacked hard from all angles to surge ahead the fighting Singaporeans 17-12. Despite putting up a brave fight with good reception and blocks, Singapore still found India too strong and were unable to shake off the rivals. As Singapore took some crucial points to reduce the gap 15-20, India stormed on with their sharp shots and well-placed serves to advance 20-15 before bagging the set 25-19. The third set turned out to be a totally one-sided affair when India raced to an initial 12-2 lead. Singapore tried hard to come back on the right track, but the Indians foiled their attempts, tearing the rivals’ defence apiece with their exceptional attacks to widen it to 17-5. Coach Sunthorn requested for timeout to improve the Singaporean tactics, but his effort was still in vain when the Indians went on the onslaught  to win the easy set 25-8 and match. “My girls played according to our plan during the training. Singapore also played very, very good. We have never played them . They could not play well in the first set, but tried hard to come back in the next two sets. In all, I was satisfied with my team and my players and hope we can win the tournament,” India head coach Chauhan Pritam Singh added.