Iranians Abolhassan Khakizadeh/Sina Shokati Shekarsaraei stamped their authority in the men’s event to give Khakizadeh a double success in Thailand as he last week teamed up with Ali Ghorbanpasandi to claim his first men’s title at the Asian U19 Championships at the same competition site here. Winning the second title with new partner Shekarsaraei was something amazing for Khakizadeh as they still combined well to eventually repeat the similar feat, helping Iran make a clean sweep of both men’s titles up for grabs in the U19 and U21 Championships in Thailand. Australia1’s Stefanie Fejes/Alisha Stevens were also on cloud nine on Thursday after making it two in a row in Thailand. Fresh from landing the women’s title at the Asian U19 Championships, the Aussies made their mark to clinch the Asian U21 crown here. 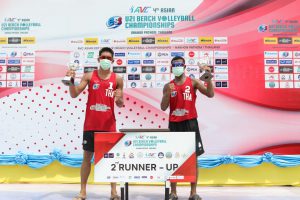 The final day of the double-gender competition turned out to be intense battle of all participating teams making the cut for the semifinals and finals as all matches ended in hard-fought three-setter. The Iranians proved their talents in the other semifinal clash to survive a mighty scare from Netitorn Muneekul/Wachirawit Muadpha to edge past the Thailand2 in thrilling battle 21-12, 17-21, 15-10. In the highly-anticipated final clash, Phichakon and Poravid surged away to win the opening set in strong fashion 21-17, but the Iranians regained their dominant form to fight neck and neck against the Thais and took the hotly-contested second set 28-26 for a 1-1 tie. Khakizadeh and Shekarsaraei stormed on in the decider to capture the set 15-7 and the championship. “I’m very happy to win again. I would like to take this opportunity to thank AVC and Thailand Volleyball Association on their supports for hosting the Championships. We are now Champions!,” said Khakizadeh during the awards presentation.

Thailand1’s Phichakon said, “It was a tough match against Iran. They are very strong with good tactics. We tried our best to beat them, but found that it was not easy. I think we also played well this time, but it’s a pity we lost the most important match.” The third-place playoff earlier saw Thailand2’s Netitorn and Wachirawit, who picked up silver medal at the last week’ Asian U19 Championships, claim bronze medal after coming from behind to beat Thailand3’s Narakorn and Nopphawit 19-21, 21-13, 15-12. Meanwhile, in the women’s competition, Australia1’s Fejes and Stevens added another agony to the same wound of Suchinna Choemphun/Apinya Saengpaeng, whom they beat in the final of the last week’s Asian U19 Championships. The superb Australian duo outplayed the Thailand1 21-15, 16-21, 15-11 in the Thursday women’s showdown to seal their second title on Thai soil. In the third-place playoff clash earlier, Australia2’s Jasmine Fleming/Jesse Mann grabbed bronze medal as they overcame a poor start to beat Patcharaporn Seehawong/Jidapa Bunongkhun with a magnificent comeback 15-21, 21-16, 15-12 win. The victory was a sweet revenge for the Aussies, who went down to the Thailand2 pairing in the bronze-medal encounter of the Asian U19 Championships last week.