Mayu Ishikawa of Japan was one of the key players for the Toray Arrows against Denso Airybees this weekend.

Tokyo, Japan, November 17, 2020 – The Toray Arrows were the lone remaining undefeated team in the Japanese V1 Women’s League and faced the Denso Airybees on Saturday to try and keep their record intact.

Denso were in fourth place entering the match and started off literally on the wrong foot.

After losing the first set, their American outside hitter Kathryn Plummer twisted her ankle early in the second set and had to leave the match. Japanese women’s national team player Yurie Nabeya came in for her. Still Toray were able to push ahead and take a 2-0 sets lead.

In the fifth set, Toray pushed to a 12-7 advantage with strong serving from Mayu Ishikawa and spiking from Jana Kulan. Still Denso would not give up the fight and tied the score at 13 with a spike from Yuki Hyodo. Kulan killed the ball for a 14-13 Toray lead, however, and a block from Nanao Inoue ended the match for the Arrows.

Kulan with 31 points (four aces) and Ishikawa (four blocks) were the pillars for the Arrows win. Nabeya had 19 (one block) in a substitute role to lead Denso in scoring in the loss.

Kurobe Aqua Fairies faced the Hisamitsu Springs on Saturday and won their first home game since being promoted to the top division in the 2018-2019 season. Kurobe finished in 10th place in its two seasons in V1, and to win against many-times champion Hisamitsu was a great accomplishment for them. Simone Lee with 29 (a block and three aces) ended the match with a kill for Kurobe. Sayo Masuda with 21 (a block and an ace) contributed as well to the win. For the Springs, Miyu Nagaoka appears to be getting up to speed after her long absence with 28 points including two blocks. Yuki Ishii also provided 21 (two blocks) for the Springs in the loss.

Kurobe, however, were not able to follow up on their positive result with another victory on Sunday, when they lost to JT Marvelous 3-1. Lee led all scorers with 25 (one block), but Kotona Hayashi’s 23 (three blocks, an ace) and Annie Drews on 22 (one block) were the lifeblood for the Marvelous in their win.

Toyota Auto Body Queenseis pulled a massive upset on Saturday sweeping the NEC Red Rockets 3-0. The Queenseis were ninth before the match, while the Red Rockets were leading the league. Toyota outkilled (51-45), outblocked (12-6) and outserved (4-0 aces) NEC.

Erika Araki (five blocks) and Mioko Yabuta (four blocks) were the main walls that the NEC offense could not figure out. Indre Sorokaite also had 16 points (including a block and two aces) for the Queenseis in the win. Sarina Koga led the Red Rockets in scoring with 17 (a block).

On Sunday, NEC came back and swept Hitachi Rivale 3-0. The win pushed NEC back to the top of the standings on points, as they are tied on wins with JT and Toray. However, both teams have games in hand compared to NEC.

Koga led the Red Rockets on Sunday with 20 points (three blocks and an ace) in the win. Neriman Ozsoy also contributed four aces for the Red Rockets.

Hitachi’s weekend was not great as they were also swept on Saturday by Saitama Ageo Medics 3-0. Mami Uchiseto led the Medics with 15 points (one block) in the win. The Rivale with both losses have now dropped six-in-a-row.

Okayama Seagulls faced the last placed PFU Blue Cats on Saturday and won the match 3-1. A balanced attack from the Seagulls through Shuka Kaneda (17), Miharu Yoshioka (16) and Sanae Watanabe (15) gave PFU problems. PFU had Roslandy Acosta and Ayaka Horiguchi each score more than 20, 27 and 20 respectively) in the loss.

The Blue Cats then faced Hisamitsu Springs on Sunday, but the Springs were too strong also taking the match 3-1. Arisa Inoue had 18 (a block and an ace) for the Springs in the win. Acosta had 21 (a block) in the loss for the Blue Cats. The Blue Cats are the only team without a win this season. 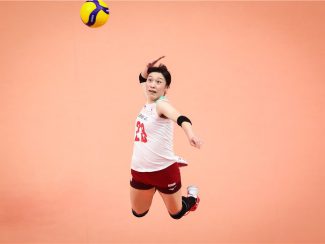