Inoue in action for Japan

Japan bounced back from their loss to China with a stunning 3-1 (25-22, 25-19, 17-25, 25-20) upset of world’s number two Brazil in a Pool D match at the FIVB Volleyball Women’s World Championship 2022 in Arnhem’s GelreDome on Friday and reserved their spot in the next phase of the tournament. It was only the 15th time Japan were able to defeat the South Americans in their 76 encounters at major world-level competitions.

Also on Friday, China managed a 3-0 (25-19, 25-22, 27-25) shutout of Czechia and lead the current pool standings on a 4-0 win-loss record and a perfect set record of 12-0. Brazil are in second and Japan are third on 3-1 and nine points each, separated on set ratio, followed by Argentina on 1-2 and pointless Czech Republic (0-4) and Colombia (0-3). Later on Friday, Argentina will meet Colombia at 18:00 local time (16:00 GMT) and, if they win, all four tickets to the next phase from this pool will have been issued with one round of matches to go. The top four teams from each of the four round-robin pools will advance to the second pool phase of the tournament. 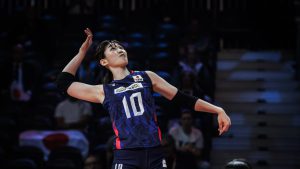 Japan’s outside hitter Arisa Inoue, who captained the team in the absence of injured Sarina Koga, delivered the match high of 27 points, including three blocks and an ace. Her cross-court teammate Mayu Ishikawa added another 18 points, including two aces. Opposite Kotona Hayashi spiked at a success rate of 52% and also scored twice from the serving line to tally 16 points, one short of Brazil’s most prolific player, outside Priscila Daroit, who finished with 17.

Ishikawa opened the match with a perfectly placed ace. Her teammates added two more points for an early 3-0 breakaway. Brazil were swift in catching up. With a beautiful back-row tip, Pri Daroit levelled it at 6-6, and the South Americans took control of the scoreboard, opening a four-point lead at 14-10. An ace by Hayashi for 14-12 gave momentum to a Japanese comeback. The Asians caught up and then another ace by Ishikawa put them in front again at 19-18. This time they did not allow their opponents to recover and pushed forward to a 25-22 win, with Nichika Yamada spiking through the middle for the last point.

Middle blocker Julia Kudiess scored directly from the serving line to give Brazil a 2-1 lead in the second set, but Japan reacted with a four-point series, crowned by a Hayashi ace for 6-3, and never looked back. With Inoue on fire, the Asians kept the upper hand through the rest of the set. Eventually, Inoue herself delivered the set winner with a kill for 25-19.

A powerful overpass kill by middle Caroline Gattaz gave an early warning that this match was far from over. With substitute opposite Tainara Santos landing her spikes from all points on the court, Brazil quickly built up a solid lead. Captain Gabriela Guimaraes and Daroit chipped in with aces for 16-11 and 23-14, respectively. Finally, back-up setter Roberta Ratzke scored the 25-17 third set winner with a two-handed overpass push.

In set four, Brazil quickly opened up a seven-point gap and when it seemed they were on their way to a big turnaround, it was Japan that put in a comeback instead. Brilliantly led by Inoue, the Asians gradually wiped out their deficit. Hayashi landed a kill to tie the score at 14-14 and Inoue finished three of the next four rallies, including a monster block for 18-14. Although Brazil were able to put their act back together and catch up at 19-19, that was as far as they could get in this match. A five-point series on Inoue’s serve followed, including an ace for 23-19. Finally Ishikawa hammered an off-the-block swing for 25-20 to get the Japanese party started.

“We tried to serve really hard and force them to play out of system. That’s what we focused on today,” said Inoue after the game. “In the third set, we couldn’t serve as well, but, in the fourth, we went back to our base and that was how we came back.”