Fantastic Nishida and Ishikawa run the show in Quezon City

High-flying Nishida on the serve

Backed by a great crowd in Quezon City, Yuji Nishida and Yuki Ishikawa played an awesome game to lead Japan to their fourth win in five matches and the top of the current standings in the men’s Volleyball Nations League 2022. The Asian side’s servers contributed nine aces in their team’s 3-1 (27-25, 25-18, 17-25, 25-16) victory over Argentina on Tuesday. The South American Tokyo 2020 Olympic bronze medallists dropped to a 1-4 win-loss record.

22-year-old opposite Nishida scored three aces and two kill blocks towards a match-high 25 points. Outside hitter and captain Ishikawa chipped in with another three serving points towards an 18-point tally. Argentina’s most prolific player, opposite Bruno Lima also finished with 18 points to his name. 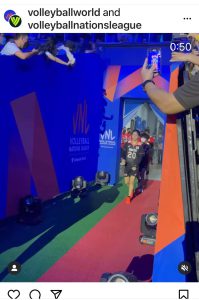 The beginning of the match did not give out any hints as to what the outcome would eventually be. Playing well in both spiking and blocking, Argentina owned the net and broke away with a 6-1 lead on a five-point run. A one-man monster block by Nishida for 13-8, however, served as the momentum changer in the first set. Middle blocker Akihiro Yamauchi delivered the first ace of the match to narrow the gap down to 15-12. That rotation brought in two more break points to get Japan back to within one. And they levelled it at 16-16. The other Japanese middle Taishi Onodera put away another ace for 19-19, followed by Yamauchi’s monster block to give the team their first lead in the set at 20-19. Ishikawa brought the first set point with an ace for 24-23. Nishida converted the third with an ace for 27-25.

In the second set, Argentina managed to keep up with Japan on the scoreboard for a while. Yamauchi’s kill block opened the first three-point gap in the set at 16-13. Ishikawa gave a long scrambling rally a brilliant finish to extend to 18-14. Then, it was Nishida who ran the show through the end of the set and once again closed it off with a perfect ace for the 25-18 winner.

The South Americans fought back in the third set. Outside hitter Nicolas Lazo authored their only ace in the match to put his team into a 5-1 lead. With playmaker Matias Sanchez on fire in conducting the offence, Argentina cruised on to win the set by 25-17.

Early into the fourth set, however, Ishikawa made the difference with a successful swing for 4-3 before rotating to the serving line and hammering a couple of aces on the way to a 7-3 lead. Japan took complete control and cruised on to a 25-16 close and a 3-1 win.

“It was a very tough game, with many quality players on the court. Mentally, our only focus was on the win and we played a good match. We went through different situations, but, step by step, we showed some good-quality Japanese-style volleyball and made it to a great victory.”

Yuji Nishida, opposite of Japan

On a total of 12 aces since the start of the competition, Nishida rose to the top of the best servers ranking, an ace clear of Dutch opposite Nimir Abdel-Aziz, who had emerged as the new chart leader earlier on Tuesday. The Netherlands proved stronger than Slovenia in the week’s opening match in Quezon City to claim a 3-0 (25-17, 25-21, 26-24) win, their third since the start of the competition. Their captain Abdel-Aziz led the match scorers on three aces and 15 kills.