Hashimoto/Kusano defeated Muraki/Kaho to secure a place in the quarterfinals in Guam.

This one-star event on the FIVB Beach Volleyball World Tour has a US$5,000 prize fund, with the winning team sharing US$1,000. 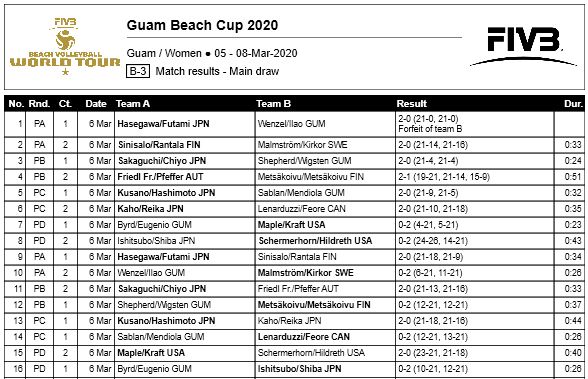 Three pairs from Japan booked places directly in the quarterfinals.

Hashimoto/Kusano advanced to the main draw as winners of qualification yesterday. They are now unbeaten through four matches at this event.

After beating Guam’s Austia Mendiola/Tatiana Sablan, 21-9 and 21-5, the duo defeated another Japanese qualifier in Reika Murakami/Kaho Sakaguchi, 21-18 and 21-16.

Reika/Kaho, who won the women’s one-star event in Tel Aviv, Israel at the end of 2019, now have an uphill battle in the Guam winner’s bracket.

They’ll begin the round of 12 against Finnish sisters Katja and Tuuli Metsakoivu.

The Finns came out the wrong side off a three setter against Austria’s Franziska Friedl/Eva Pfeffer in their first match of Pool B. They won the first set, 21-19, but Friedl/Pfeffer recovered to take the second, 21-14, and then the third, 15-9.

Frield/Pfeffer have Talar Kirkor/Sara Malstrom of Sweden in the round of 12.

Kirkor/Malstrom emerged alongside Anna Rantala/Ida Sinisalo from the middle of Pool A. Rantala/Sinisalo will face Japan’s Satoni Ishitsubo/Asami Shiba in their match of the bracket.

Seeded just 13th at this tournament, Kraft and Maple are making their debut on the FIVB Beach Volleyball World Tour in Guam. Their first set against Hildreth/Schemerhorn went into overtime and second to the wire – but the 17 year olds did enough to take both and the win, 23-21 and 21-18.

Hildreth/Schmemerhorn take on Canada’s Anna Feore/Rian Lendarduzzi in the round of 12 with the winner of that setting up a quarterfinal clash against Japanese top seeds Futami/Hasegawa.

The winners’ bracket in Guam features five teams from Japan, two each from the United States and Finland, and one from Canada, Austria and Sweden.

Competition continues at the Guam Beach Cup with the round of 12 and quarterfinals tomorrow, and semifinals and finals on Sunday, March 8.

CAN THO OPEN POSTPONED AMID CORONAVIRUS CONCERNS 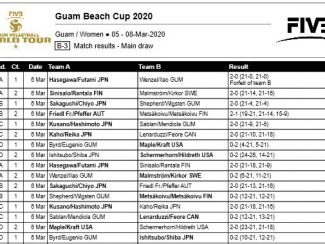 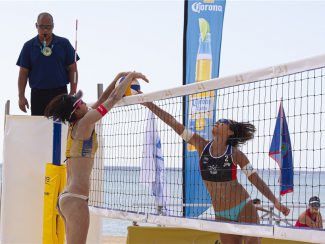