Jinjiang, China, May 25, 2019 – Anders Mol and Christian Sørum are on track for two golds in a row as they enter the FIVB Beach Volleyball World Tour Jinjiang 2019 final against Brazil’s Evandro Gonçalves Oliveira Júnior/Bruno Oscar Schmidt.

The first semifinal on Yakou Beach saw world number ones Mol/Sørum up against Jinjiang defending champion Trevor Crabb with his current partner Tri Bourne. The two teams are no strangers, meeting twice before, once in the 2018 Las Vegas semifinal and then last week in Itapema pool play.

“We’re super happy to win this semifinal, we were up against a really strong team and we knew it was going to be a battle. The game was up and down, they were in front and then we were in front, it was interesting, but I’m really glad we made it in the end,” said Sørum.

Mol won more than one point with his unstoppable crosscourt spike and paired with their uncanny ability to read a match, it made life difficult for Crabb and Bourne. “They started both their sets very well and we were behind from the start and we had to push to get some points and break points. Anders played it really well, he was really tired with some cramps in his legs and he managed to fight through and I’m super proud of Anders today,” said Mol.

Mol/Sørum enter Jinjiang one week after they took gold at the Itapema 4-Star and are aiming for two in a row.

“It’s our second final in our second tournament in a row, so it feels great. We just have to get some rest and get ready for tomorrow. We’ll see which Brazilian team we meet, but it’s good to have a Brazilian team in the final again,” said Sørum.

Brazil was absent from the Itapema podium, but make up for it in Jinjiang with both Evandro/Bruno Schmidt and Andre Loyola Stein/George Souto Maior Wanderley in the final four. 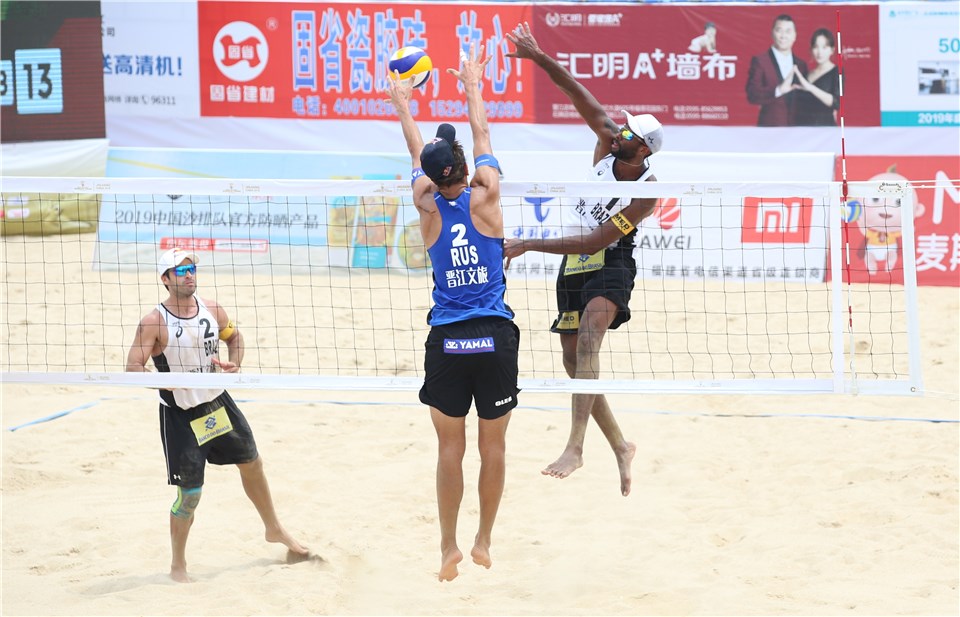 The second semifinal between the two Brazilian teams produced some spectacular beach volleyball in the opening set. Both teams appeared acrobatic, athletic and strong with some incredible points from each side of the net.

Nothing could separate the two as the set progressed point for point, but it was Bruno’s defensive capacity that edged Evandro/Bruno Schmidt ahead, 26-24.

“It’s always hard, we compete against each other a lot in Brazil and when we come here there is a lot of emotions coming. You can ask any country, it’s always hard when you compete against your own. But the main plan for us was to keep strong until the end and we did this and I’m so glad,” said Bruno. Andre/George now go for their first medal as a team in the bronze medal match against Crabb/Bourne. The young Brazilian team were the ones to prevent Spain’s Pablo Herrera Allepuz and Adrián Gavira Collado from another final four finish, defeating them in the morning quarterfinal, 2-0 (26-24, 24-22).

“They have been doing an excellent tournament here, especially they beat Spain, who are doing well this year. We had an excellent semifinal, the high level was right here so I couldn’t be more satisfied that we finish the day like this,” said Bruno.

The gold medal match between Mol/Sørum and Evandro/Bruno Schmidt will be the first time the two teams meet, with Evandro and Bruno Schmidt only joining forces at the beginning of this year.

“Everybody getting into the final is probably going to meet these Norwegians. They are doing well, they are healthy, they are young, they are so powerful. I couldn’t expect more than such a high level of beach volleyball for tomorrow,” said Bruno.