Jana Kulan of Azerbaijan was key for Toray Arrows this weekend.

On Saturday, Toray played Victorina Himeji in their first match. The Arrows swept Victorina 3-0. Toray dominated at the net with a 50-34 advantage in kills and the Arrows had no hitting errors (excluding blocks) compared to Himeji’s nine errors. Jana Kulan led the Arrows with 17 points (including a block and ace) in the win.

In their match on Sunday, the Arrows took on Kurobe Aqua Fairies, who defeated the Toyota Auto Body Queenseis 3-0 on Saturday to take their third win of the season. Toray and Kurobe split the first two sets, but in the third set a three-point run at 7-5 by Toray gave them a 10-5 lead, and the Arrows kept pushing the lead to easily take the set 25-14. In the fourth set a four-point run at 6-5 again gave the Arrows a 10-5 lead, and they cruised from there to win the set 25-15 and the match 3-1. Kulan again drove the Arrows with 25 points (including two aces), but also had help from Ai Kurogo’s 21 (three blocks and three aces) in the win. Simone Lee was Kurobe’s gasoline with 22 (one block).

JT Marvelous swept PFU Blue Cats 3-0 on Saturday to keep pace with Toray’s wins. Mizuki Tanaka on 15 (a block, two aces), Kotona Hayashi with 14 (a block), Aika Akutagawa with 12 (four blocks) and Annie Drews on 12 (one block, one ace) all provided balance for the Marvelous. Roslandy Acosta was the lone bright spot for the Blue Cats with 14 points (one block) in the loss. PFU then met Saitama Ageo Medics on Sunday trying to win their first match of the season but lost 3-1. Saitama used Yuri Yoshimo’s 23 points (two aces) to power them to the win. Acosta for PFU did her best also with 23 (a block) in the loss.

Hisamitsu Springs played Okayama Seagulls in a five-set match on Saturday. Okayama took the match 3-2, with Shuka Kaneda leading the Seagulls with 27, all kills. For the Springs, their American middle blocker Foluke Akinradewo also had 27, which included three blocks. Hisamitsu then faced NEC on Sunday, as the Red Rockets tried to match Toray and JT Marvelous in winning their matches. The Red Rockets dominated the Springs with their spikes (55-32 kill advantage) and swept the match 3-0. NEC’s Turkish oppositie Neriman Ozsoy had 18, all kills.

Denso Airybees faced Hitachi Rivale on Saturday without their American outside hitter Kathryn Plummer who was out due to an injury suffered in the previous weekend. Rei Kudo picked up the slack for the Airybees with 26 points (one block) in their 3-1 win over Hitachi. Hannah Tapp and Miwako Osanai both had 17 for Hitachi, Tapp had four blocks, while Osanai had one block and an ace in the match. Hitachi have lost seven matches in a row. 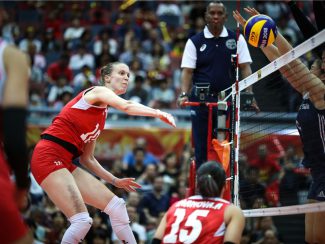