Bangkok, Thailand, September 3, 2020 – Heungkuk Life outside hitter Kim Yeon-koung lived up to her name in the first two games of the Korea Volleyball Federation (KOVO) Cup tournament, said a news coverage by Jhoo Dong-chan on koreatimes.co.kr on Thursday.

Heungkuk was considered the frontrunner for the tournament, featuring South Korean international twins Lee Jae-young and Lee Da-young even before it acquired Kim in June. Experts now say the team are likely to win without conceding a single set.

In the KOVO Cup opening match against Hyundai E&C Hillstate, Kim came on as a substitute in the second and third sets. It was her first appearance in nine years in Korea since she left for Turkish side Fenerbache in 2011. Kim only scored seven points, but displayed her quality in defense.

Like the first match, Kim focused mainly on defense in the second-round game against IBK Altos, but started demonstrating her quality in offense after Lee was subbed out for an injury. Kim scored 18 points.

“Kim was a constant threat to the opposition when she came in from the outside in the first two games,” said KBS Sports commentator Lee Sook-ja.

Kim made her professional debut with Heungkuk Life in 2005. She played in the team for four years, before signing for JT Marvelous in Japan for two seasons. She then signed a three-year contract with Fenerbahce in 2011.

Kim played another three years with Fenerbache as the team offered an extension. She spent the 2017―18 season in the Chinese Volleyball League, and went back to Turkey the following year with Eczacibasi VitrA.

Kim was the Most Valuable Player and Best Scorer of the 2012 London Olympics, despite South Korea finishing 4th place. She holds the Olympics records for the highest 207 points in eight games, topping another volleyball legend Ekaterina Gamova’s record of 204 points at the 2004 Athens Olympics. 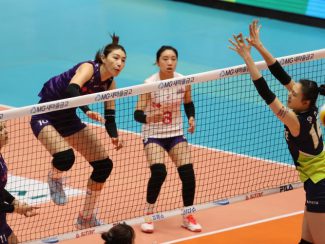