Led by New Zealand’s Shaunna Polley and Alice Zeimann, teams from four different countries won a pair of matches on Thursday to advance to the main draw of the third FIVB Beach Volleyball World Tour one-star event in Sofia.

With only the women playing this week at the Sofia Beach Club in the outskirts of the Bulgarian capital, top-seeded qualifiers team Polley and Zeimann led the way with a pair of straight-set wins. The New Zealanders started the day with a 2-0 (21-15, 21-18) victory over the home team of Desislava Nikolova and Iva Partaleva and confirmed their presences in the main draw with a 2-0 (21-14, 21-6) triumph over Scotland’s Lynne Beattie and Mellissa Coutts.

Seeded tenth in the Sofia qualifier, Canadians Sophie Bukovec and Camille Saxton caused the biggest upset of the day as they downed second-seeded Anita Dave and Sofia Starikov of Israel in a three-setter (12-21, 21-17, 15-7) to advance. Earlier, they had defeated Greece’s Mirto Kalamaridou and Dimitra Manavi in two close sets (22-20, 21-19).

Seeded sixth, Belgians Sarah Cools and Lisa van der Vonder found their way to the main draw with a couple of wins over higher-seeded opponents. First, they upset fourth-seeded Switzerland’s Mara Betschart and Annik Stahli in three sets (21-12, 16-21, 15-9). Later, they kept their form against third-ranked Alina Dormann and Amanda Harnett of Canada, posting a 2-0 (21-16, 28-26) win. 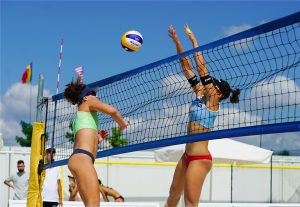 Belgians and Swiss battle in a qualification match in Sofia

The fourth and final main draw spot went to Estonians Heleene Hollas and Liisa Soomets, who eliminated another Canadian team, Darby Dunn and Devon May, in straight sets (21-19, 21-17). In their first-round match, the Europeans downed the Netherlands’ Annemieke Driessen and Desy Poiesz in three sets (21-11, 19-21, 15-9).

The main draw starts on Friday and continues until Sunday, when the medal matches will be played in Sofia.

THE OLYMPIC NUMBERS TO KEEP AN EYE ON IN WOMEN’S VOLLEYBALLTHE LONG WAIT IS ALMOST OVER: MEN’S TEAMS TO GET TOKYO 2020 VOLLEYBALL UP AND RUNNING