The records waiting to fall as Tokyo 2020 finally arrives

Kim Yeon Koung at Rio 2016: The Korean looks for a fourth entry in the list of players to have scored 30 points or more in a single Olympics match.

With the women’s Olympic tournament at the delayed Tokyo 2020 Games set to begin on Sunday (following the men’s start on Saturday), there’s a wealth of records and performances setting the bar for players and teams.

Here’s what to look out for during the 38 matches that will culminate with the final on 8 August.

The scoring record to beat is 37 points, which is what Brazil’s Marianne ‘Mari’ Steinbrecher bagged in the epic semifinal against Russia at the Athens 2004 Olympics – though it was not enough to see the South Americans through to the final as they blew a two-set lead and fell in five.

Mari had a striking 61% in attack (31/51) and added six blocks for her total of 37 which still stands today as the best scoring performance in a single match at the Olympic Games.

A total of nine players feature on the list of those that have scored 30 points or more in a single Olympics match – two of them appearing more than once.

Korea’s Kim Yeon-Koung will be present at Tokyo 2020 as she strives to get a fourth entry in the list. Her personal best stands at 34 points in just four sets from Korea’s 3-1 win over Serbia in pool play at London 2012. 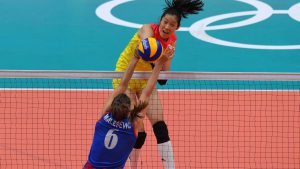 China’s Zhu Ting attacks past Serbia’s Tijana Malesevic in the final of the Rio 2016 Olympics as she emerges top scorer of the Games overall on 179 points.

Of those already on the list, Russia’s Nataliya Goncharova and China’s Zhu Ting will be competing, alongside Kim, at Tokyo 2020.

The race, then, will be on who for will be top scorer of the Olympics overall and the magic number to reach for an all-time record will be 207, by Kim at London 2012.

But can Zhu become the first player with back-to-back top-scoring honours at the Olympics? She was overall best scorer at Rio 2016 with 179 points.

Individual records in specific scoring skills are also something to look out for at Tokyo 2020.

Three players share the all-time Olympic record of most blocks in a single match, which is eight, by Gamova and China’s Feng Kun from Athens 2004, which was matched by Cameroon’s Stephanie Fotso at Rio 2016.

The team record for most blocks in a single match is 20, by Brazil in that Athens 2004 semifinal against Russia.

Overall, Danielle Scott of USA registered the best blocking performance with 34 stuffs (1.13 per set) at the Sydney 2000 Games. 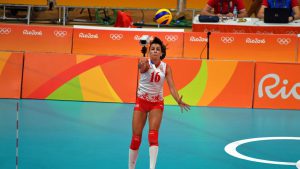 Milena Rasic serves at the Rio 2016 Olympics: The Serbian middle blocker topped the charts as best blocker and best setter at these Games.

But Serbia’s Milena Rasic, who topped the chart of best blockers last time round at Rio 2016 with 25 stuffs (.83 per set) will be on hand at Tokyo 2020 to try and become the first player with back-to-back top blocking performances at the Olympics.

Rasic is already the only player to also feature in another list of top performers – also the best server of Rio 2016 with 17 aces (.57 per set). The record to beat here is 18 aces by Cuba’s Zolla Barros from Athens 2004. 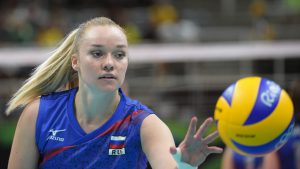 Ekaterina Kosianenko prepares to serve at Rio 2016: The Russian holds the all-time Olympic record of nine aces in a single match.

In a single match at the Olympics, Russia’s Ekaterina Kosianenko holds the all-time record with nine aces against Argentina at Rio 2016. The team record is 13 aces by Algeria against Great Britain at London 2012.

All records are since the introduction of the rally-scoring system, as of the Sydney 2000 Olympic Games.