How her overflow of energy is inspiring success

At the 2021 FIVB Volleyball Nations League, veterans Erika Araki and Sarina Koga and young stars Aki Momii, Mayu Ishikawa and Ai Kurogo were the obvious heroes of the team, but it was libero Mako Kobata’s support in defence and her sheer enthusiasm that inspired their final four finish. 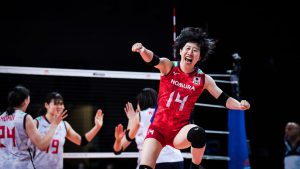 Now that she has made it to her first Olympic Games, the Japanese libero is looking to become a staple of the team’s constant rise.

“This is my first Olympic Games participation, so I want to do my best,” Kobata said.

The 28-year-old is a bundle of energy who plays an important role in Japan’s defence, and she plays the position so well as she amps up the intensity level of the team through her flying digs and pancake saves.

“As a libero, since I cannot make the point for my team, I have to make sure that they get the support they need through defence in the back row. If there is a strong spike, I must commit to saving the ball for my team,” she said.

With impossible-to-defend balls from spikes by the world’s best hitters, Kobata always makes it so easy and exciting, leaving the fans and even opponents in awe.

Aside from her heroics on the court, Kobata is like the team cheerleader who motivates her teammates. And sometimes at the end of the match, she still has energy to jump and run around the court to celebrate with her teammates. 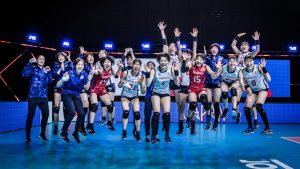 “After having to wait a long time to compete again because of the COVID situation, I think I have gathered a lot of energy to do all those things. All of us are just grateful to be back and have this good competition,” Kobata said.

“Of course my first objective is to win the match so I will always do my part in that respect. But I also have to do my part as the motivator of the team.”