Thailand player Pluemjit Thinkow said: “We have to accept the truth that there is a winner and loser in any kind of sports. For this time I admit that I feel sad because we have trained really hard for the Olympics. Today we lost because of our own poor performances. We also have to accept that our opponents prepared this match very well and they deserved it.”

“I think today we served quite well and our service reception was better than in the previous matches. But we could not block their attacks”

Thailand head coach Danai Sriwacharamaytakul said: “They prepared very well. We tried to be aggressive to attack them, but they did a very good job in reception. They did very well in attacking from the wing. We tried our best but we could not stop them. They were better than us in all aspects of the game. So congratulations to Korea on their victory and achievement to qualify for the Olympics. Our team has to move on and keep working hard. I hope one day it will be our turn.”

Korea head coach  Stefano Lavarini said: “First of all, I am very happy that my team could qualify for the Olympics. I am very proud of the team. It was very fantastic to play in the final in a country like Thailand which has a lot of volleyball fans.

“I would like to thank the organisation and  the Thai people for the kind support and great hospitality. We really love this place.

“Thailand are a team with a great speed, probably the quickest volleyball team in the world with a lot of combination plays. What we have to do is  to try to make the ball far from the net so the setter can’t play whatever she wants. Today we put them under pressure with our strong serves. And I think serving is a good characteristic of our team. We tried to attack and avoid them blocking. Our attacking worked really well today. Of course with Kim on the court today, everyone felt confident and supported each other very well.

“I think the passion and determination that they have in the team to go to the Olympic made us win today.”

Korea team caption Kim Yeon Koung said: “When we prepared  for this competition, we felt under pressure since we did not have much time to prepare together. However, we have a good coach who gives us confidence and supports us really well.

“To qualify for the Olympics is very important for me and my team as this probably will be my last Olympics, so that is why I really push myself very hard. I would like to thank all the fans who cheered for us. I am just happy for the result today.

“We expected a tough match against Thailand and they played well as we had expected. But we really pushed them hard from the beginning and also our attacking was effective, so we could play against them easier.

“Lee Jae Yeong also did a great job in her position today. She is a young player but she pushes herself really hard. We hope to do well in Tokyo.” 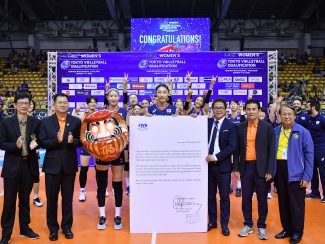