Nakhon Pathom, Thailand, August 12, 2022 – Korea, current world No.33 and bronze medallists at the recent FIVB Challenger Cup in Seoul, made fantastic comeback to stun Australia in epic tie-breaker in their last match in the round of the last eight teams in Pool E in the 2022 AVC Cup for Men at the Nakhon Pathom Provincial Gymnasium here on Friday. 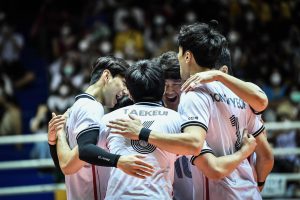 Against world No.39 Australia, the team they had already beaten 3-2 in the Challenger Cup, Korea fielded a formidable lineup led by talented Heo Subong, who weighed in 33 points in the earlier-mentioned tournament at home, star spiker Lim Sungjin and Na Gyeongbok. Australia were also strong with the likes of ace spiker Malachi Murch, Thomas Heptinstall and instrumental captain Beau Graham. 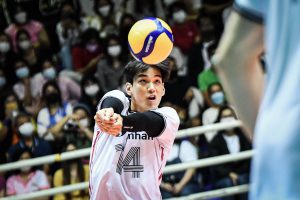 Both sides started an attack from the very beginning of the opening set. As Australia were trailing three points at 8-11, powerful left-hander Matthew Aubrey came up with mighty attacks to help the team level at 12-12. Their excellent combinations and resilience worked out pretty well as the Aussies stretched it to 24-20 before Max Senica and Beau Graham solidly blocked a Heo Subong’s fierce attack. Australia took the first set 25-20. 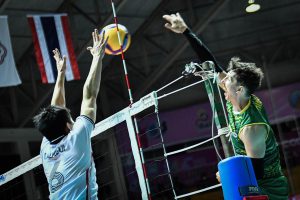 Murch and Aubrey put Australia ahead 15-13 in the second set before Korea bounced back, unleashing several attacks to seriously challenge the Aussies. Korea tried hard to effectively attack Australia but they performed impenetrable defence, allowing Korea scoring difficulty. Aubrey remained on fire as Australia widened the lead to 24-21. Korea tried hard to stop the rot against the rivals, but their efforts were to no avail. Graham leaped to produce an effective mid-court drop shot to help Australia win it 25-22 for two sets in a row. 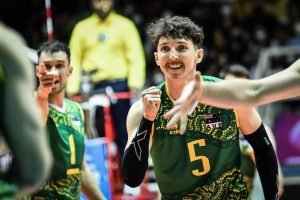 Holding a 2-0 advantage, Australia continued their remarkable run in the third set which they led initially 8-6, but Korea learned how to cope with the Australian tactics. With Heo Subong and Lim Sungjin immense for the team at the net, repelling wave after wave of the team’s attacks, Korea broke away after meeting the Australians at 12-12.  The Aussies made storming attacks to gain some crucial points and as they came near 19-23, Korea still had enough in their tank to hold them off with their fine attacks and solid blocks to claim the set 25-20. 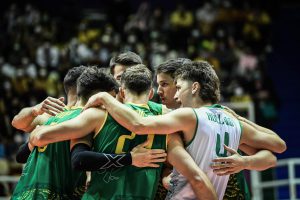 In the fourth set, the Koreans made a lot of unforced mistakes, while the Australians fought back bravely and led 16-13 at the second technical knockout. Graham carried out a lightning-fast spike to win another crucial point for Australia before Korea held their nerves to score four points in a row and narrow the gap 17-18. From then on, Korea put the pressure on the oppositions, attacking relentlessly from all corners to claim the set 25-22, forcing a tie-break. 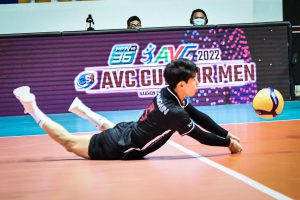 Both teams gave it all-out in the decider which turned out to be a see-saw battle. Leads moved back and forth until 19-19 when Heo Subong nailed a crucial spike for Korea. Lim Sungjin hammered an overpass to put Korea ahead 20-19 before Kim Kyumin and Heo Subong successfully blocked a spike from Nicholas Butler to end the Aussies’s challenge. Korea won the hotly-contested set 21-19 and match. 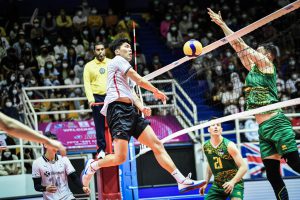 Since the very first match in the tournament, Korea beat Hong Kong, China in straight sets, but after that, the Koreans played every team, Thailand, Japan and Australia, in all five sets. 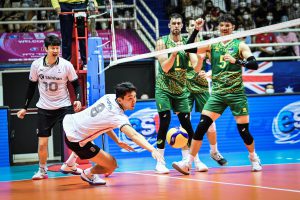 Heo Subong topped all scorers with 29 points including 25 attacks for Korea, while Na Gyeongbok and Lim Sungjin kept good company to add 22 and 20 points respectively. Murch Malachi scored a team-leading 22 points including 18 attacks and 3 blocks. 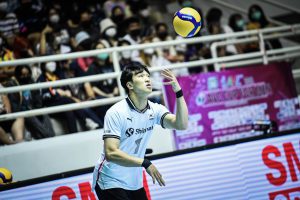 Korea finished second to Japan in Pool E to secure their semifinal berth, while Australia were relegated to classification round for 5th-8th places.