Sydney, Australia, March 9, 2019 – Nicole Laird and Becchara Palmer gave host Australia a fighting chance to make it to the final round of the FIVB Beach Volleyball World Tour Sydney 3-star on Saturday.

Laird and Palmer sparked the emotions of the Manly Beach crowd as they logged a straight-set (21-12, 21-19) win over Japanese pair Megumi Murakami and Miki Ishii in the quarterfinals. The victory came after Taliqua Clancy and Mariafe Del Solar’s exit in the second round.

“We knew that we could do some good stuff in this tournament,” Laird said. “As far as Taliqua and Mariafe are concerned, they really played with some good quality volleyball this week and they really had a tough draw.

“It’s not always necessary the result that counts but the quality of volleyball put forward. I think all Australian teams showed some massive quality which we should all be very proud of.”

Their patience paid off as they overcame the good service game of their opponents.

“The Japanese girls had good service and they are good at finding space on the court and putting the ball down,” Palmer said. “Our strengths are our heart and athleticism, and our ability to put the ball to the net. That made the difference for us. We just thought to do it one point at a time – pass the ball, set the ball and be aggressive in attack.”

In other quarterfinal matches, the United States’ Brooke Sweat and Kerri Walsh Jennings redeemed themselves by beating Greece’s Vasiliki Arvaniti and Panagiota Karagkouni 2-0 (28-26, 21-18) after losing to them in the pool play round.

In Walsh Jennings’ 18-season FIVB career, she has faced the same opponent twice in her 132 events. She now has five bounce back wins against an opponent after losing to that team in their first match.

Wang Fan and Xia Xinyi emerged victorious in the all-Chinese matchup against Lin Meimei and Zeng Jinjin as the latter conceded due to injury. 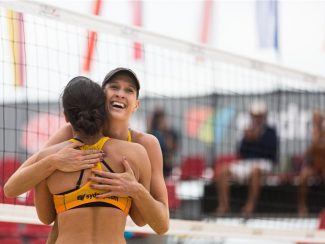