Two-time Volleyball Nations League bronze medallists China are one step closer to the Finals in Ankara, Türkiye after they swept Poland (25-8, 25-23, 25-20) in their second match in the third week of the Preliminary Phase on Thursday.

The victory against the Poles gave the Chinese a lift, moving the Asians up from sixth to fifth place with six wins (20 points), and, perhaps most importantly, denied the Europeans, who are also in contention for a spot in Ankara, a chance to improve on their current four wins and 11 points.

Outside hitter Li Yingying was instrumental in the Chinese triumph against the Poles as the 22-year-old, left-handed player, who was part of the team’s roster in both of their VNL medal-winning campaigns, led all scorers with 15 points, tallying 11 kills, a match-high three blocks and one ace.

Some of Li’s top plays in the match included a clever tip over the Polish block to give China an early 3-1 lead in the first set and a monster block to stop Poland’s Aleksandra Gryka and tie the second set at 12-12. She also came up big for her team in the final point of the second set, hammering the ball from the backcourt at the end of a long rally to confirm the Chinese 25-23 victory.

The Asians dominated every aspect of the match, outscoring the Europeans in kills (39 to 30), blocks (11 to four) and aces (three to one). 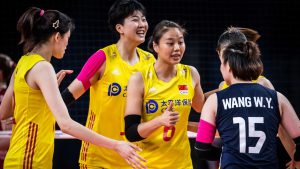 Poland’s top scorers in the match were opposite Martyna Czyrnianska and outside hitter Olivia Rozanski, who produced nine points each.

China will be back on the court on Friday to face the Dominican Republic at 13.30 local time (10.30 GMT) and, depending on other results, another win could be enough to secure the team’s presence in the Finals, which will take place in Ankara, Türkiye, from July 13-17.