33-year-old Palmer is a stalwart of Australian beach volleyball, joining the national program in 2003 after being talent ID at the South Australian Institute of Sport.

Palmer’s beach volleyball career spans nearly two decades, highlighted by winning the Junior World Championships in 2006 and being selected to the Australian Olympic Team for the London 2012 Games.

Upon reflection of her career, Palmer’s personal highlight was in fact the people that she met along the way.

“Looking back I am really proud of my playing career, it wasn’t always easy, in fact it rarely was, which in so many ways makes the battles and the successes all the more sweet,” Palmer said.

“I’m so grateful to have played alongside some incredible women over the years, who have taught me so much, not only about volleyball but more importantly about life.

“On the court, my greatest achievement by far was qualifying for the London 2012 Olympic Games.

“I still remember calling my parents after a top 10 result in Rome in 2012 and telling them that we (Louise Bawden) had qualified, and it still makes me emotional to this day.

“The whole family had sacrificed so much financially to get me there and to be able to share such happy news with them was a moment I’ll never forget,” she said.

London 2012 Olympic partner Louise Bawden said that Palmer is, and always was, the epitome of professional.

“When I joined the sport I had very little understanding of what it took to be successful,” Bawden said.

“But from day one I could see qualities in Becchara that looked exactly like success to me. She possessed a flair for the game, a fire to compete, a level of skill and just enough sass and swagger to make me sure she was the partner I needed to pursue my dream of competing at the Olympic Games.

“I will forever be grateful to Becchara for being my teammate, and my friend, for all of our amazing adventures and for giving her all towards our dream of becoming Olympians,” she said.

Olympic gold and bronze medalist and Volleyball Australia Board member Ying Jiang said that she knew Becchara was bound to achieve success from the outset. 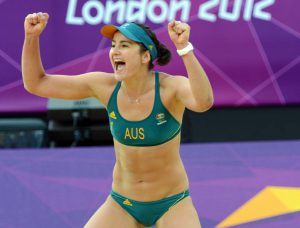 “Becchara was the most talented athlete in the South Australian Institute of Sport talent ID program I ever saw, and with her hard work and determination she reached the highest level in Volleyball,” Jiang said.

“I’m very proud of Becchara and I wish her the very best for her future, in whatever she wishes.

“Hopefully she is still involved in volleyball in Australia, to make our sport bigger, better and stronger. All the best to you, Becchara,” she said.

“Becchara is a competitor – she has always had a hunger to win and the instinct to score points when nobody else could see how,” Nelson said.

“Seeing Becchara’s growth as a person over the years has been an absolute pleasure and her legacy of a competitive drive with a smile on her face will be something for the future generations to strive towards.

“She loves beach volleyball and we have all been lucky to witness her journey, thanks Bec!” he said.

In the final years of her career, Palmer teamed up with Rio 2016 Olympian Nikki Laird, the pair sharing a special bond as teammates and friends.

“Becchara has had a unique career in many ways, but her last three years, of which I had the honour of sharing a court with her, she demonstrated a commitment to me, the game and to Volleyball Australia that surpassed challenges of all types,” Laird said.

“She was unwavering in her passion for the sport and I am so grateful to have had the opportunity to put my name next to hers in Australia’s history of beach volleyball,” she said.

Margo Wiltens coached Palmer and Laird during their pursuit to qualify for the Tokyo Olympics, and said the qualities Palmer showed along the way will set her up for success in her next endeavours.

“Finding the best version of herself over the last few years – travelling the world and competing in many competitions, guarantees a successful transfer to her new career,” Wiltens said.

“Becchara lived beach volleyball all the way and is a role model for the sport. I wish Becchara all the best in her next chapter,” she said.