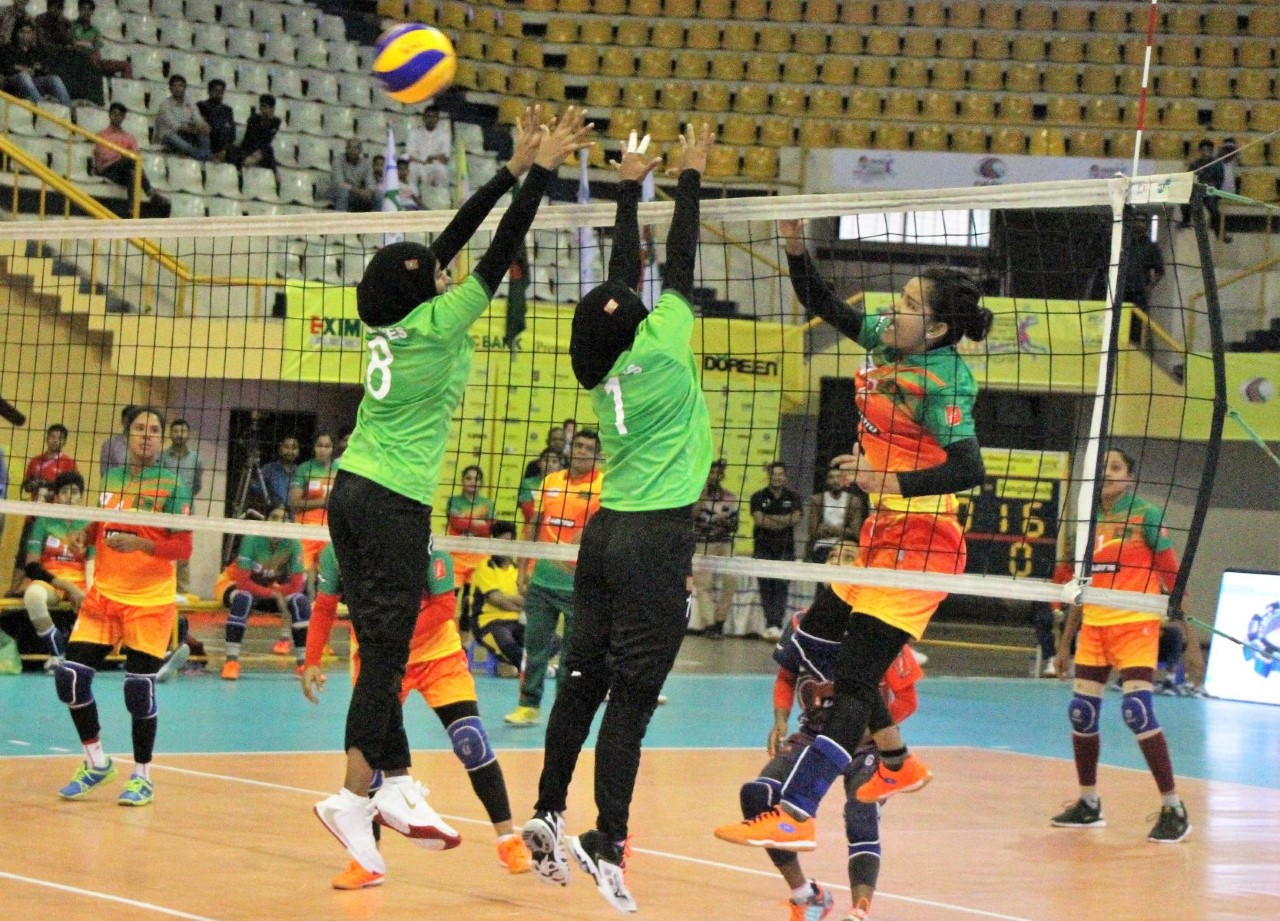 Maldives, fresh from edging Kyrgyzstan in a hard-fought five-setter on Saturday, struggled to beat the host side 25-16 27-25 25-22 in 80 minutes. The Maldivians put Bangladesh under constant pressure from the front and back of the court with some good digs, while inspirational captain Hawwa Rashidha was a focal point in the team’s attacks in the first set to carry out some fine shots for the visitors’ 25-16 win. 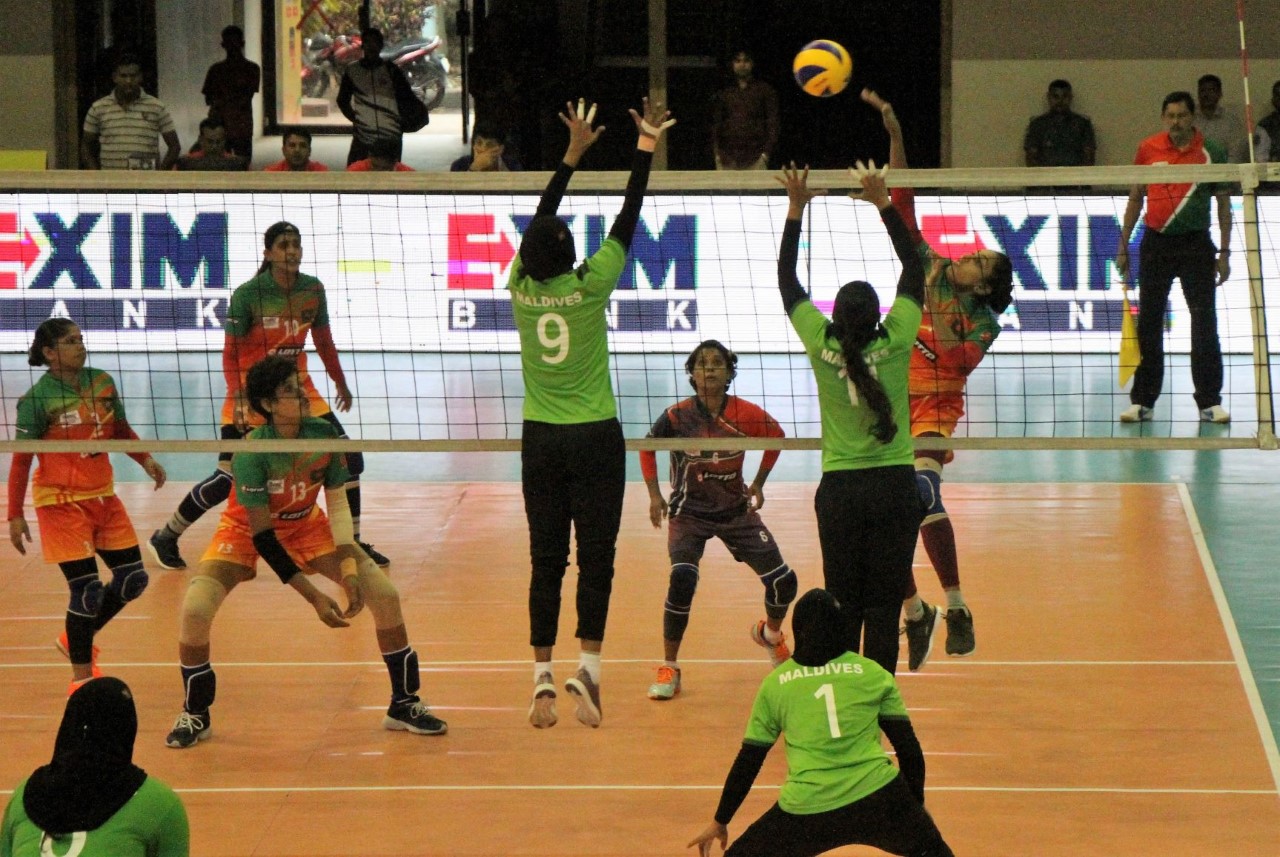 Conceding one set, Bangladesh recovered from a slow, errors-strewn start obviously seen in the opening set, to shrug off their rust and unleash several powerful blows from Most Sabina Khatun and Bithe to put the visitors in trouble on some crucial moments of the second set. However, Maldives fared better in the final run into the home stretch to win the close set 27-25. 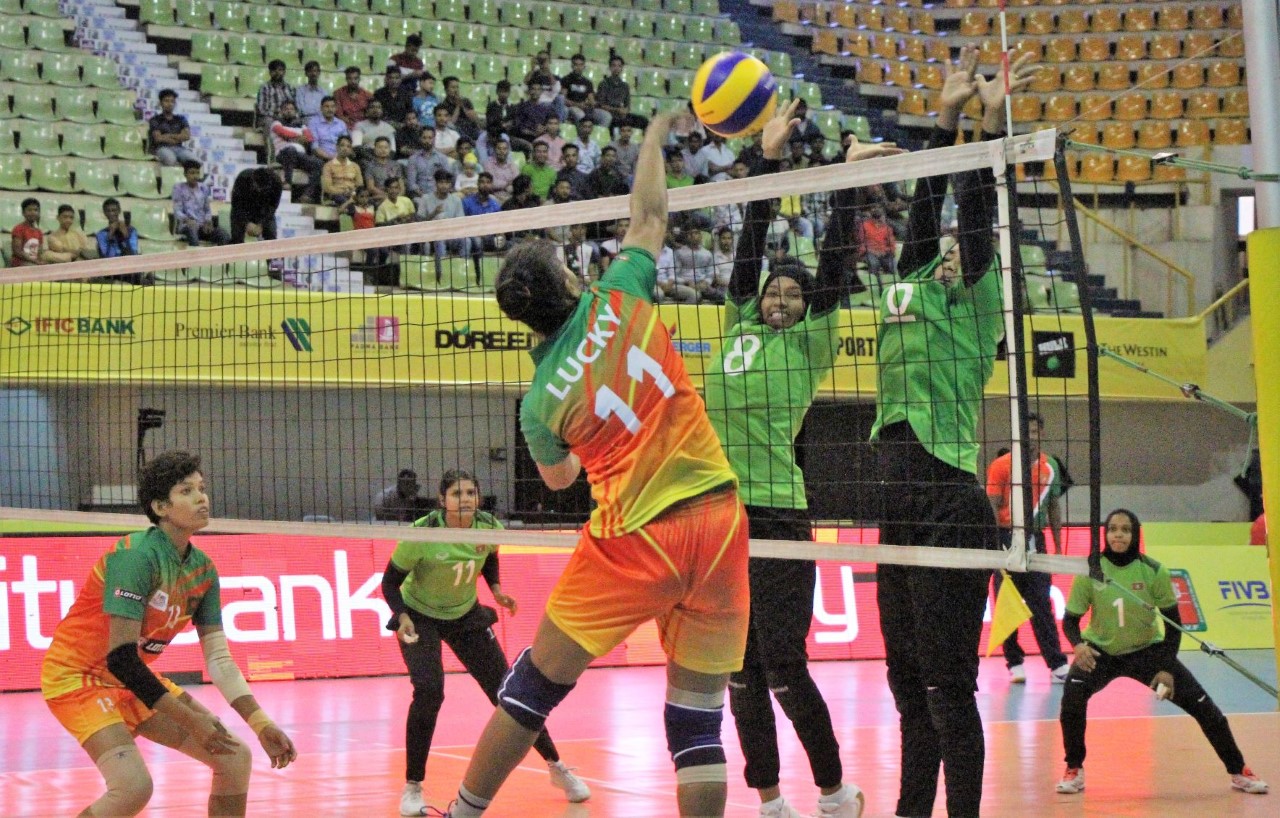 In the third set, Maldives and Bangladesh came out with almost similar standard, but Maldives played well consistently with better teamwork to edge out past the battling host side 25-22 for an eventual 3-0 win in this tough encounter. 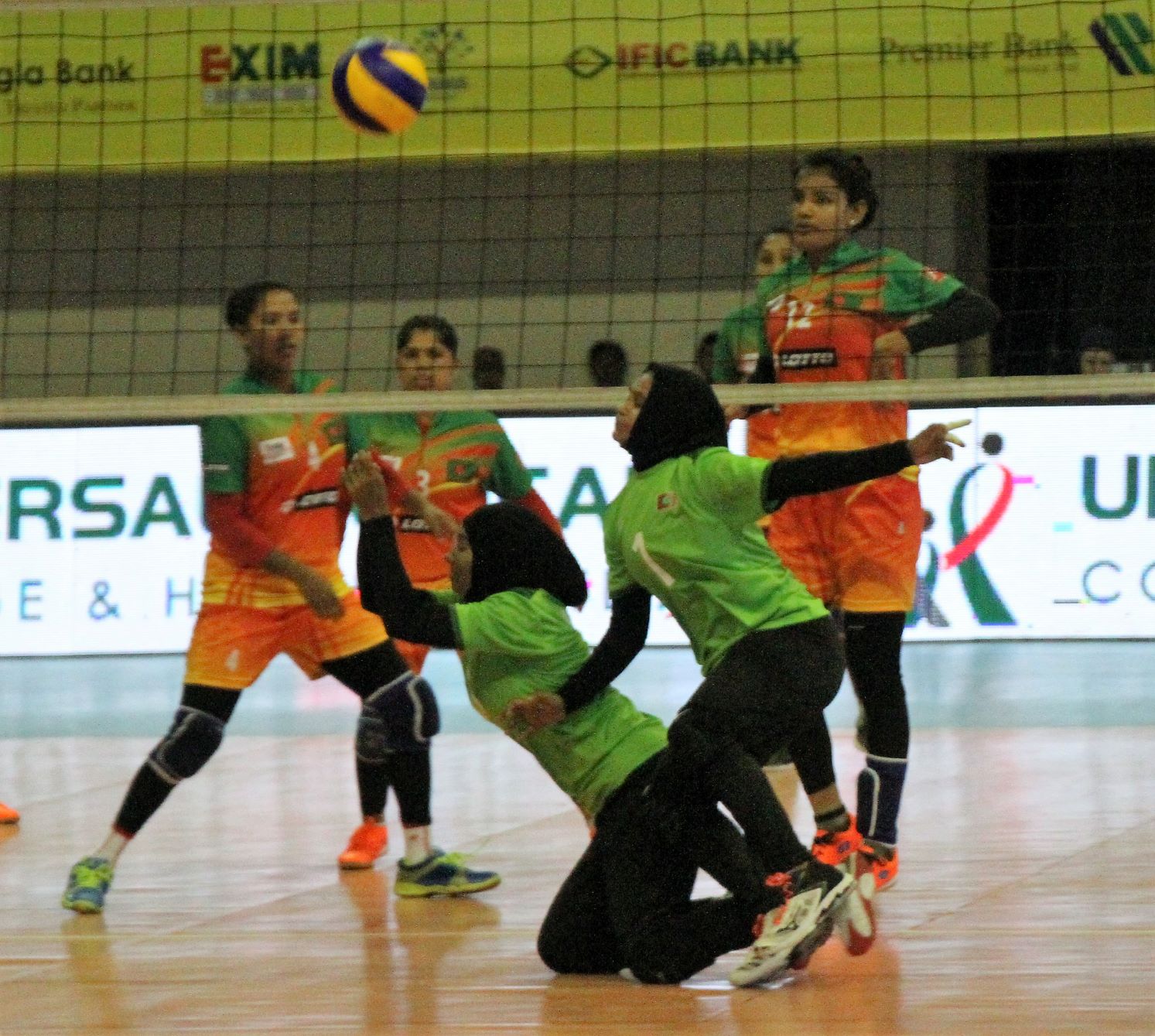 Hawwa Rashidha scored a match-high 19 points from 15 attacks, one block and 3 aces for Maldives, while no one from Bangladesh scored in double figures. Most Sabina Khatun chipped in with 9 points for the host side including 8 attacks from 28 attempts.

In the second encounter, Nepal spent 53 minutes in their first match against Afghanistan to brush off the rivals in a completely one-sided battle 25-4 25-9 25-6. 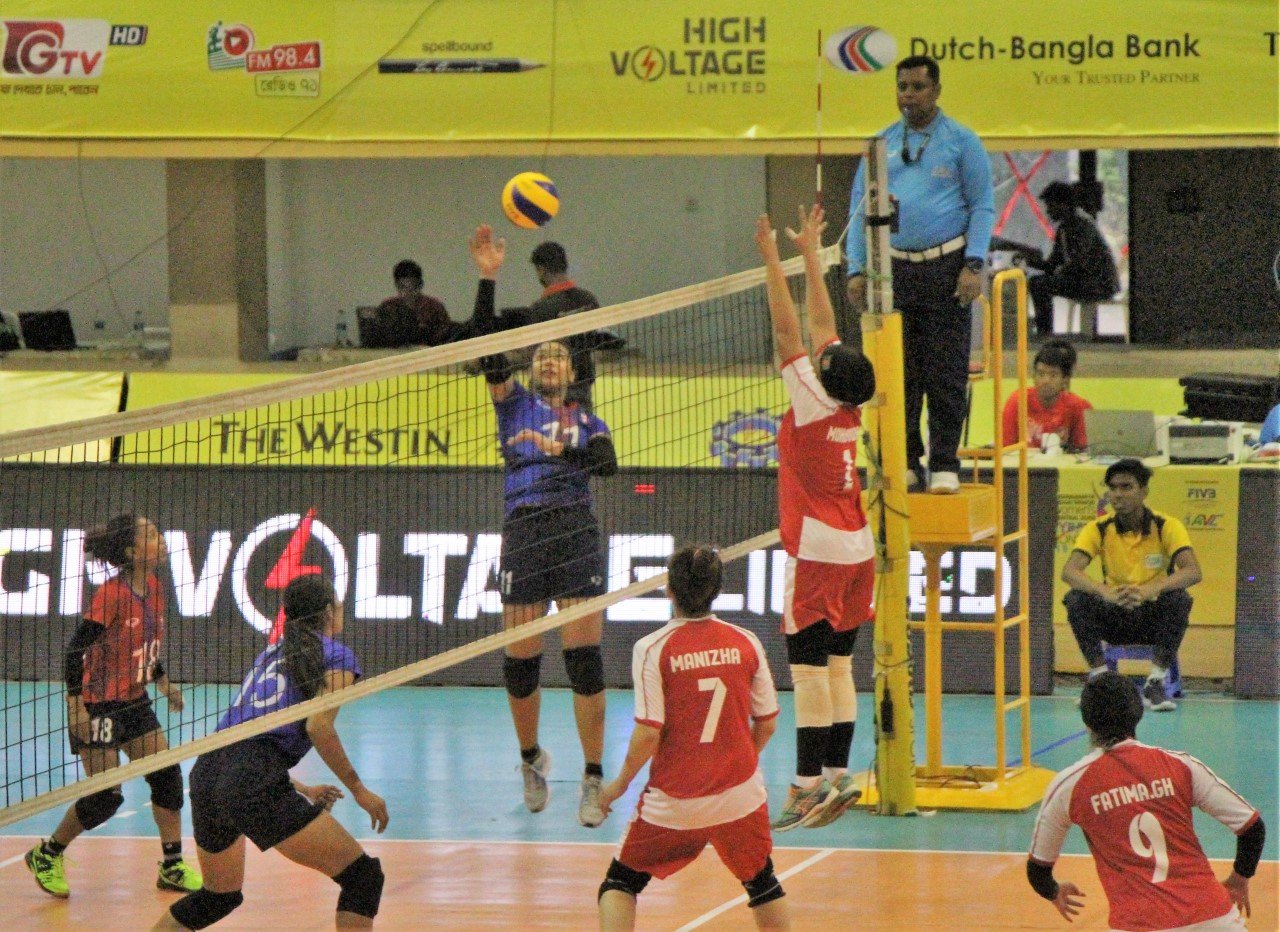 Talented Pratibha Mali registered a match-high 21 points including 17 points from 28 attempts, while Niruta Thagunna contributed 14 points for the team including a team-leading 7 aces. Halima Hassani led Afghanistan with only 2 points. After two days of the single round-robin competition, Maldives led the pack with 5 points from two straight wins. Nepal had 3 points from one win to come in second place. Hosts Bangladesh are trailing in third position with 3 points from one win against one loss. Kyrgyzstan came in fourth place overall with one point from one loss, with Afghanistan in fifth place with two losses.

On Monday, Kyrgyzstan will take on Nepal, with Afghanistan taking on Maldives. Hosts Bangladesh will have a rest day. 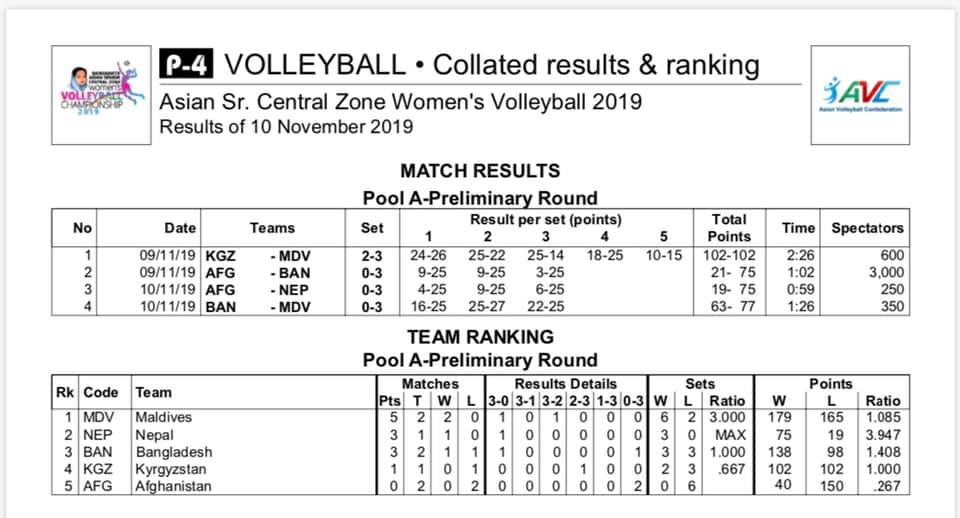