MOL AND SORUM OUT FOR TWO IN A ROW IN JINJIANG

Jinjiang, China, May 21, 2019 – Norway’s Anders Mol and Christian Sorum are back in China with eyes on further strengthening their lead in the world rankings at the 2019 FIVB Beach Volleyball World Tour Jinjiang.

Mol/Sorum returned to the FIVB World Tour podium at the weekend taking gold in Itapema after two quarterfinal finishes this year in The Hague and Xiamen. They make the long journey to China to go for two in a row as number one seeds in Jinjiang.

The USA fields three teams in the main draw with Jinjiang 2018 champion Trevor Crabb back to defend the title he won with John Mayer. He now plays alongside Tri Bourne and the pair had success in China last year with gold at the Qinzhou 3-Star in their first tournament together. Bourne/Crabb also had a strong run in Itapema reaching the quarterfinals last week.

Nicholas Lucena and Philip Dalhausser are back in China after an early exit in Xiamen, ending in pool play. John Hyden and Ryan Doherty also feature in Jinjiang following bronze at the recent Kuala Lumpur 3-Star.

Russia’s Oleg Stoyanovskiy and Viacheslav Krasilnikov displayed astonishing form in Xiamen to top the podium in April. Jinjiang has the potential for a repeat match-up in the final where the Russians faced Pablo Herrera and Adrian Gavira from Spain.

Also on the Jinjiang podium last year was Nils Ehlers and Lars Fluggen. The German pair earned silver and enter this year’s qualification tournament. Top seeds in qualification are Brazil’s Alison Cerutti and Alvaro Morais Filho who paired up only this year and earned gold at the Kuala Lumpur 3-Star earlier this month.

The Brazilian women mean business in Jinjiang, accounting for four of the top seven seeded teams with Agatha Bednarczuk and Eduarda Santos Lisboa leading the way. The pair won the Hamburg 2018 World Tour Finals, but are still short of a medal in 2019, finishing ninth in Xiamen and fifth in Itapema.

Ana Patricia Silva Ramos and Rebecca Cavalcanti Barbosa Silva’s recent success has seen them soar up the world ranking where they currently sit in eighth. They took gold at The Hague 4-Star and then the Xiamen 4-Star before being defeated by Talita Da Rocha Antunes and Taiana Lima in the final 16 of Itapema.

Czech team Barbara Hermannova and Marketa Slukova are back in China as number one seeds. After earning silver in Xiamen, they took it one step further the following week at the Kuala Lumpur 3-Star securing gold.

USA’s Sara Hughes/Summer Ross, Australia’s Taliqua Clancy/Mariafe Artacho and Karla Borger/Julia Sude from Germany will also be among the podium challengers in Jinjiang.

Xia Xinyi/Wang Fan head up the local teams and Xue Chen/Wang Xinxin will hope to build on their positive ninth place Xiamen finish in their first 4-Star tournament as a team.

Nai-Han Kou/Pi Hsin Liu of Chinese Taipei were silver medallists at the 2018 Jinjiang 2-Star and this year enter the qualification tournament. Also on the Jinjiang podium in 2018 was Japan’s Reika Murakami who is back in 2019 with a different partner, Kaho Sakaguchi.

The double-gender 4-Star Jinjiang tournament is the fifth of nine FIVB Beach Volleyball World Tour stops in China during the 2018-2019 season. 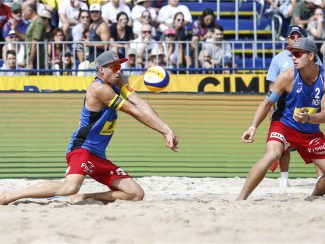