Tokyo, Japan, November 10, 2020 – The Suntory Sunbirds started the weekend in third place after three straight wins and took on their Osaka Prefecture rivals, the Panasonic Panthers. Panasonic were the only remaining undefeated team in the league and knew that if they could sweep both matches over the weekend against the Sunbirds, they would have a commanding lead in the league’s regular season.

On Saturday, the Panthers dominated the first set, 25-17, but the Sunbirds came back to take the second set 25-21 to tie the match at 1-1. In the third set, Suntory jumped to a five-point lead, which Panasonic would whittle down to one at 19-20, but four kills by Russian Dmitriy Muserskiy ended the set 25-22, 2-1 set lead for the Sunbirds. The fourth set was close, but at 17-17 two Muserskiy spikes and a Masahiro Yanagida service ace gave Suntory a 20-17 lead. However, Suntory could not hold it and the score was again tied at 22. As the set pushed into extra points, Panasonic held off the match points, but a service error by Panasonic’s Michal Kubiak gave Suntory a match point at 27-26, and Muserskiy finished the match with a kill, 28-26 for the set score, 3-1 sets to Suntory.

Moving onto Sunday’s match, it was similar as Panasonic won the first set and Suntory won the second, again 1-1 going to the third set. Suntory jumped to a six-point lead at 11-5 and just kept pushing the lead and coasted to the set win, 25-20, 2-1 sets for Suntory. In the fourth set, Panasonic had a 16-12 lead at the second technical time-out. However, the Sunbirds tied the set at 21. Both teams then traded points until 25-25. An error by the Panthers gave Suntory a match point at 26-25, with Muserskiy to serve. He then served an ace that Kunihiro Shimizu could not handle to win the set 27-25 and the match 3-1.

With the two wins, the Sunbirds leapfrogged into first place and are the only team with seven wins after eight matches.

Wolfdogs Nagoya took the Panthers’ misfortune and their two wins over VC Nagano Tridents, 3-1 on Saturday and 3-0 on Sunday, to move into second place, tied at 6-2 and 18 points with Panasonic. The Wolfdogs have a better sets ratio than the Panthers as the third tiebreaker.

JTEKT Stings won their two matches with Oita Miyoshi Weisse Adler over the weekend, sweeping 3-0 on Saturday and going five-sets to win on Sunday. On Saturday, Ryosuke Hakamaya had 20 (including two blocks and an ace) in a replacement role for Yuji Nishida, who was rested. Nishida did play on Sunday and he was needed. Nishida had 27 (including a block and two aces) in the Stings’ 3-2 win. Oita’s two foreigners Australian Curtis Stockton and the Philippines Brian Bagunas carried their team both days. Stockton with 15 (a block) on Saturday and 34 (four blocks) on Sunday, while Bagunas had 16 on Saturday and 21 (five blocks) on Sunday in the losses.

JT Thunders Hiroshima had a bad weekend dropping from second to fifth in the standings by losing their two matches with Sakai Blazers, 3-2 on Saturday and 3-1 on Sunday. For the Blazers, Frenchmen Jhon Wendt handled the offensive load with 29 points (including a block and two aces), while middle blocker Takashi Dekita had four blocks as part of 16 points in Sunday’s win. Chinese Taipei’s Chien Chen Chen and Taishi Onodera were consistent for JT on both days with 19 (two blocks) and 14 (three blocks) respectively on Saturday and 15 (one block and an ace) and 11 (one block and four aces) respectively on Sunday in the losses. 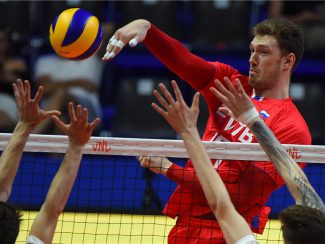