Following the 23rd AVC Elective General Assembly via Zoom Meeting on October 26, the new AVC Board of Administration Members, with Mrs Rita Subowo at the helm, will join an online gathering in order to discuss important topics regarding the current situation of AVC, the impact of COVID-19 pandemic on the staging of AVC competitions as well as the ongoing work of the continent’s governing body towards its vision of the four-year future.

In addition, Chairpersons of seven AVC Technical Committees and Council, namely Sports Events Council, Referees Committee, Coaches Committee, Development and Marketing Committee, Finance Committee, Beach Volleyball Committee and Medical Committee will be nominated on the same occasion, while the selection decision of FIVB Board of Administration Members representing AVC will also be made.

“Apart from AVC updates on activities and competitions to be shared among AVC Board of Administration Members, the key topics to be raised for discussion and decision are the nominations of AVC Official Positions, Chairpersons of AVC Technical Committees and Council and selection of Board Members who will represent AVC in the FIVB Board of Administration,” AVC Secretary-General Mr Shanrit Wongprasert was quoted as saying.

“One of the key topics expected to be raised for discussion is the AVC Competition Calendar and preparations to host 2021 AVC Championships when the COVID-19 crisis will probably get better and restriction lockdown is likely to come to an end and life returns to normal. However, as far as I’m concerned, AVC and host countries find the going tough in organising AVC Underage Championships in January 2021 because the COVID-19 pandemic is unfortunately getting worse in many countries and Asians in particular,” he cited.

“If those championships cannot be held due to the remaining impact of the COVID-19 pandemic, the qualification of teams in each AVC Underage Championship from the previous edition will be taken for consideration. For easier understanding, the teams qualified from each AVC Underage Championship in 2018 to compete in the 2019 FIVB Underage World Championships will obtain chances to take part in the 2021 edition of the FIVB Underage World Championships again. Moreover, I would like to suggest the teams interested to compete in AVC Championships in April 2021 that they submit their entries earlier to confirm their participation and ensure their availabilities and readiness for those tournaments.”

IRAN LEAGUE TO RESUME ON SUNDAY 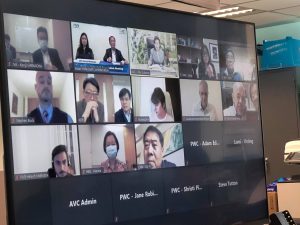