Tokyo, Japan, March 1, 2020 – In the five days leading up to the Japanese Men’s V1 League Final between the Panasonic Panthers and JTEKT Stings (February 24 to 29), the Japanese V.LEAGUE made a difficult decision to play the final without fans attending due to the coronavirus outbreak across Japan. The matches were already to be televised live through its broadcast partners, NHK and DAZN.

On February 28, both teams were given Daruma dolls in their team colors. 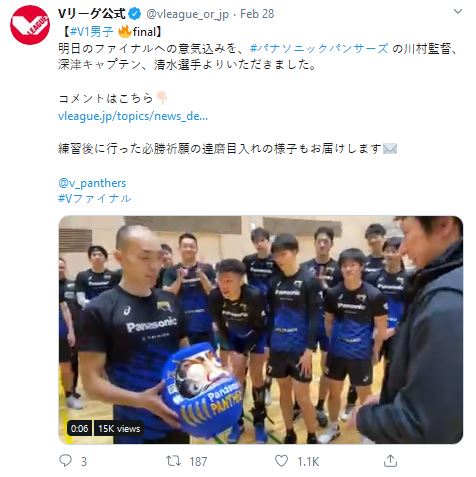 Daruma dolls when purchased have eyes that are blank in white. However, the user will then select a goal and fill in the left eye of the doll’s two eyes. Once the desired goal is achieved the right eye is filled in. In the video above Panasonic’s head coach Shinji Kawamura did his team’s daruma, while JTEKT’s head coach Shinji Takahashi worked on his team’s daruma in the video below. 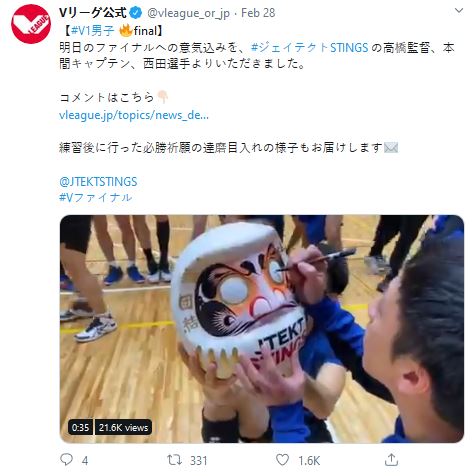 In front of the television crew, the press, league and team officials only, the final started between the two teams. At 6-6 in the first set, the Panthers went on a five point run to take an 11-6 lead, which they would not relinquish. A back-row attack by Michal Kubiak off the JTEKT block gave the Panthers the set 25-17 and a 1-0 set lead.

In the second set, it was again tied at 6-6 before JTEKT went on a 7-2 run, of which three points came from spiking errors and a missed serve by the Panthers to make the score 13-8. Panasonic tried to fight back but could not get any closer than two points before a Yuji Nishida back-row spike ended the set 25-22 and to tie the match at one set all.

With the third set, the Panthers got out quickly and pushed their lead up to six points at 14-8. However, JTEKT then went on a 5-1 run to get back into the set at 13-15. The teams then exchanged the next eight points with JTEKT serving at 17-19. A service ace by Ryosuke Hakamaya and a Shuhan Rao block right after that tied the score at 19-19. At 20-20 Nishida went back to the service line for JTEKT and served an ace to give them the lead at 21-20 and it was immediately followed by a Matey Kaziyski block to take a 22-20 lead. Kaziyski served an ace to make it 24-21 and another Nishida back row attack gave the Stings a 2-1 set lead with a 25-22 score.

The fourth set had the Panthers get out a four-point lead at 13-9, but again they could not hold it and JTEKT tied the score at 14-14. From there neither team get more than a two-point lead. However consecutive spikes by Nishida gave JTEKT a match point at 24-23. Kubiak then tipped over Nishida to force extra points at 24 all. A service ace by Akihiro Yamauchi gave the Panthers a chance to win the set at 25-24, but a Nishida spike tied the score. A Panasonic hitting error then gave JTEKT another match point at 26-25, but a Kubiak attack tied the score at 26-26. Kubiak then blocked a Nishida spike completely over the JTEKT coverage for another Panthers set point at 27-26. On the next point, Nishida miss hit his spike past the end line for the Panthers’ point, 28-26 and tied the match at 2-2.

Onto the fifth set, where a quick lead can end a match. Panasonic started with serve, but JTEKT used a Kaziyski spike to take a 1-0 lead. Two more points on serve by way of a Nishida spike and a block gave the Stings a 3-0 lead. Two more points soon followed for JTEKT to force a Panthers time out at 1-5. However, before the side change, the Panthers were able to cut the lead down to one through two missed spikes and an Issei Otake block for a 6-7 score. However, that would be the closest that the Panthers would get as the Stings got a Nishida spike for the side change at 8-6. Nishida again at 9-6, a Panthers’ hitting error to make it 10-6 and a Stings block for a five-point lead at 11-6. The gap would close a little, and JTEKT would serve for the match at 14-10. Yamato Fushimi’s serve was called out, but the Stings challenged the call. If the call was confirmed, Panasonic would still be alive.

On video review, the ball landed on the line, giving the Stings the point and set at 15-10, the match 3-2 and their first title in the team’s history. Nishida led the scoring in the match with 36 points (4 aces, 1 block and 31 spikes). He also was named the MVP of the season and to the league’s Best Six. His Bulgarian teammate Kaziyski had 24 points (21 spikes, 2 blocks and an ace), and further support came from China’s Shuhan Rao with 3 blocks and 8 spikes for 11 points. Kubiak led the Panthers with 29 points (25 spikes, 3 blocks and an ace) in the losing effort. Rao and Kubiak were also named to the league’s Best Six. Kubiak’s Panasonic teammate Kunihiro Shimizu had 19 spikes and was awarded the league’s Fighting Spirit Award. 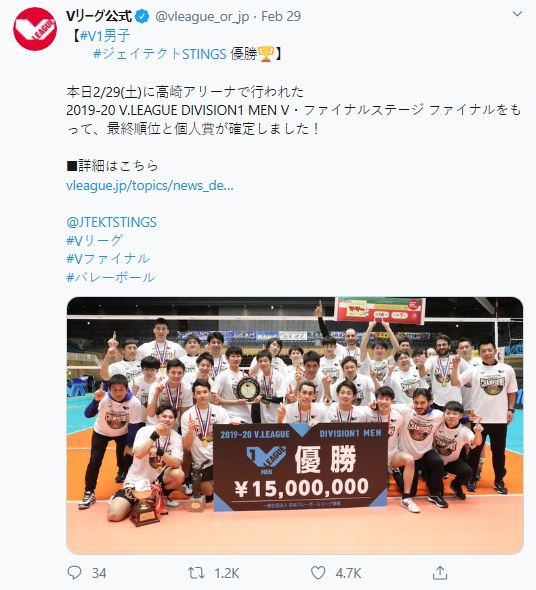 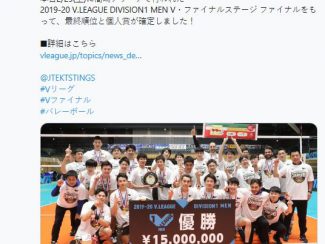 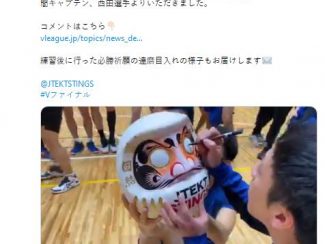 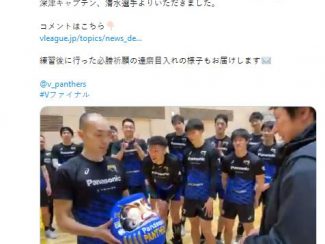 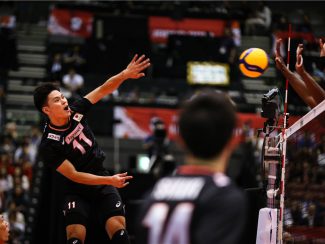