NIZAR: SETTING THE START OF A GOLDEN ERA

Eleven years ago, Zulfikar Munawar Nizar was dreaming of representing Indonesia. Now he can call himself a SEA Games champion.

Bangkok, Thailand, July 4, 2020 – It all started with a dream. Indonesia had to wait a full decade before reclaiming the Southeast Asian Games men’s title, and playmaker Zulfikar Munawar Nizar was a key to their immaculate record in Manila. When his country last won the prestigious regional championship, Nizar had no idea he will have his moment ten years after.

“I was only 16 years old back then and I didn’t know much about the SEA Games or any international multi-event championships,” the now 26-year-old setter said. “But after [the 2009 SEA Games], I was inspired to be a great player and be able to play for the Indonesian national team.”

Nizar had a golden start representing the red and white when they won the 2012 ASEAN School Games. A few years after, Nizar suited up for the senior national team where he and his wife Asih Titi Pangestuti represented Indonesia in front of their home crowd at the 2018 Asian Games.

“Playing volleyball makes me really happy. It gave me lots of friends, a way to have my own income and have a better future.

“I have always believed that if I give my best I will also get the best results. Volleyball is not only about hitting or passing the ball, it’s also about the family you have inside the court,” Indonesia’s captain said.

It was only his first appearance at the SEA Games but Nizar was tapped to carry the team behind his back as their main playmaker and their captain. Despite facing pressure playing two roles, all Nizar had in his mind was to orchestrate their offence and take the gold medal back home. With his brilliance, Nizar was able to set up Indonesia for a clean sweep of the SEA Games to win the coveted title again after 10 years.

“Of course I’m really, really happy to have the experience to play at the SEA Games for the first time and win a gold medal for my country. At that time I just wanted to set my teammates as best as I could so they could play well and we could win together.”

Nizar now hopes their golden run at the SEA Games would not be the end of their mission. Instead, he hopes their victory would give them more opportunities to prove themselves at the international arena.

“I hope we can get more opportunities because the Indonesian national team has a great potential to excel in Asia. The best results can only be obtained with a balance of good preparation, good training materials and best nutrition for athletes,” the SEA Games champ said.

His masterful performance in Manila wowed both the home crowd and fans back in Indonesia. With that, Nizar vowed to continue to work hard to bring pride to his country and inspire younger generations to fulfill reach for their dreams.

“My goal as a setter now is to be the best player for myself, my family and my country, and give them as much achievements as I can. I still have a lot to learn and practise in order to become the best.

“I want to inspire young setters and tell them not to get discouraged, to keep learning and struggling. Believe the results and never betray the effort. Keep fighting and never get discouraged,” the playmaker said.

"The ball is a Friend" – Tsubasa Ozora #asiangames2018 #indonesia #volleyball

Nizar’s gold-winning performance has inspired aspiring setters and champions. Growing up, only one setter inspired the playmaker to push himself to always be at his best: Brazil’s playmaker and Rio 2016 Olympic champion Bruno Rezende.

“Bruno, the setter from the Brazilian national team, inspired me to be a real player. He has always been my role model in playing volleyball up to now. I have always wanted to be like him, and have his intelligence, his high spirits,” said Nizar.

“He never gives up and takes good control during the match. That’s what I always try to instill in myself.

DAVARZANI: IRAN COACH TO BE APPOINTED UNTIL SEPTEMBER 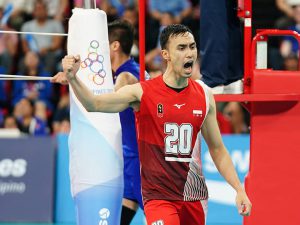