Lausanne, Switzerland, May 18, 2020 – Onuma Sittirak has been leading Thailand’s national team for a full decade now, establishing herself as a necessary member of the squad and thrilling fans whenever she takes to the courts.

The 33-year-old outside hitter, who celebrates her 34th birthday next month, has wandered around numerous clubs across most of the world but has always been back to help the national team of her home country and has been present in all the great achievements of Thailand regionally and globally.

With a background already in athletics, Aon, as she is also known to her fans, first got involved with volleyball at the age of 10. Ten years later, in 2006, she was first called to the Thailand national team.

It was then just three short years later that she led Thailand to their first ever Asian Championship title in Hanoi and was named MVP of the event for her efforts.

Onuma was also on the gold medal winning Thai squad at the 2013 Asian Championship at home in Nakhon Ratchasima. A year previously she had helped Thailand win a gold medal at the 2012 Asian Cup in Almaty, where she was also named MVP.

At global level she was named to the Dream Team of the 2013 FIVB World Grand Champions Cup as one of the outside hitters, alongside Japan’s Saori Sakoda.

At club level, she has played in diverse teams from Asia to Europe, including in Turkey, Vietnam, Switzerland, Russia, Azerbaijan and Japan.

On one of her returns to Thailand, Onuma joined Federbrau in Bangkok, winning the 2009 Asian Club Championship where she was named both MVP and best attacker. She was again best scorer and best attacker in the next edition in 2010 with Federbrau, and won a third continental club title in 2011 with Chang of Bangkok.

After three seasons and two V.Challenge League titles with JT Marvelous in Japan, she returned in 2017 to Thailand to play for Nakhon Ratchasima Volleyball Club before moving on last year to Diamond Food Volleyball Club in Saraburi as captain of the newly-founded side. 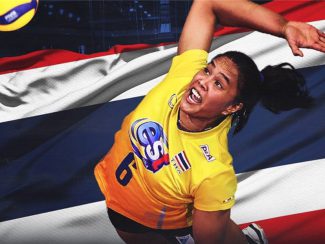