Lausanne, Switzerland, June 21, 2019 – With all eyes focused on the Under-21 and senior World Championship events in Udon Thani, Thailand and Germany, the opening events on the 2019-2020 international calendar were announced here on Friday with the FIVB Beach Volleyball World Tour set to begin its second season of qualifying for the Tokyo 2020 Olympic Games.

With the bulk of the 2019-2020 events to be released in September following the World Tour Council meeting, the three sites announced on Friday are double gender tournaments in China, Mexico and Qatar where the FIVB has sanctioned events previously.

Here are the dates and sites for the 2019-2020 FIVB World Tour events to be played in October and November: 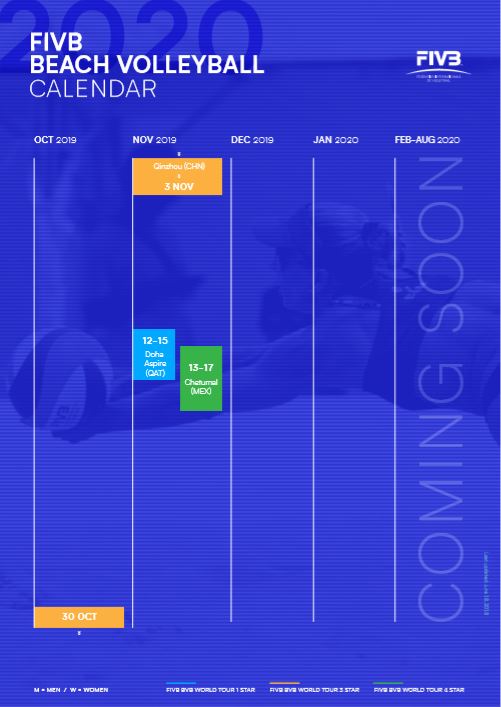 The Chinese and Mexican events follow on from similar tournaments in 2018, while Doha will be hosting a double gender event for the first time after staging men’s only tournaments in 2014, 2015, 2016, 2018 and 2019 where teams from Germany (twice), Italy, the Netherlands and Chile topped the podiums.

The first Qinzhou gold medals were won last September by a men’s team from the United States (Tri Bourne/Trevor Crabb) and a women’s duo from Brazil (Rebecca Cavalcanti/Ana Patricia Silva).

After a successful launch of the Chetumal Open in October 2018 where over-flowing crowds watched Canadians Heather Bansley and Brandie Wilkerson capture the gold medal at the women’s-only event, the Mexican port city on the Yucatán Peninsula will feature double gender competition this November and has been upgraded to 4-star.

The FIVB is currently confirming events in the remaining part of the season from January until August 2020 and welcomes applications from organisers wanting to stage a World Tour event in 2020.