Bangkok, Thailand, December 17, 2020 – Club teams made their continuous preparations ahead of the first edition of the Qatar Senior Men`s Beach Volleyball League for 2020-2021 season, which will be held from December 20 to February 11, 2021 at the Al-Gharafa Beach Club, volleyball.qa reported.

Mr.Hussein Imam, a technical expert at the QVA, supervised the physical fitness tests for all players, which included measuring the weights and heights of the players as well as keeping social distancing in line with the COVID-19 preventive measure, on December 13 evening at the Al Gharafa beach courts.

Precautionary measures, in cooperation with the Ministry of Public Health and Aspetar, had been held as part of the necessary arrangements for the start of the tournament next Sunday.

The “QVA” stipulated that those involved with the ten participating teams including players, technical and administrative officials and staffs undergo medical examination and swab tests. 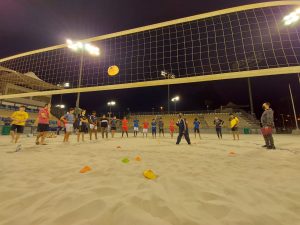