As countries around the world have been celebrating the start of their New Year at the beginning of January, Asian volleyball family also received good news on the very first day of the year when Mr Mohamed Latheef, President of Central Asian Volleyball Association (CAVA), has proudly bagged Asia’s Outstanding President Award.

Mr Mohamed Latheef, himself Member of AVC Development and Marketing Committee, started his government service in 1994 as an Accounts Assistant at Air Maldives Limited, the national airline of Maldives, a Limited Liability Company owned by the Government of Maldives. During the six years at Air Maldives Limited, Latheef held senior positions including Steward and Chief Steward positions. 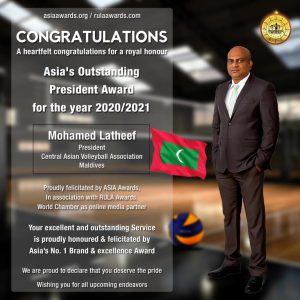 When the Government dissolved Air Maldives, Latheef joined Galaxy Enterprises Maldives Private Limited as the Operations Manager for Lauda Air Italy and Saudi Arabian Airlines. He was then later promoted as a Sales Promotion Manager for Sri Lankan Airlines during 2006 and endorsed as the General Manager at Galaxy.

During his public service, he served as a Government Appointed Board Member to Island Aviation Services Limited, a State-Owned Enterprises. During 20016 and 2018, he served as the Chairman of Maldives Road Development Corporation and Managing Director of Addu International Airport Private Limited, both State- Owned Enterprises.

With over 27 years of experience, Mr Latheef has worked at some of the most high-end and well known corporations and government agencies at managerial posts. Mr Mohamed Latheef is currently appointed as the acting Managing Director of City Investments Pvt Ltd.

Mr Latheef is a strategist and a pioneer ready to regulate the company to the most beneficial heading while carrying out its vision, mission and long haul objectives. His executive abilities have been fundamental in managing the organizing and excelling at the field, Mr. Latheef has proved likewise. He continuously strives and ensures that the organization is continually moving towards satisfying its present market and doesn’t veer from the company’s goals.

Specializing in Business Administration, Mr Latheef has obtained his Master’s Degree from the University of Boston, UK. In addition to Mr Latheef’s public service, he is very active in developing Volleyball activities in Maldives.

After winning many inter-schools Volleyball Championships, at a very young age of 17, Mr Latheef represented Maldives National Volleyball Team at South Asia Federation Games in Colombo in 1991. He has also played for many clubs in Maldives and won many titles. After retiring from playing, Mr Latheef started coaching Volleyball.

Mr Latheef was elected as the President of Volleyball Association of Maldives in 2016 and also was a Board of Administration Member of South Asian Volleyball Confederation in 2017 to 2020.

During his term as the President of Volleyball Association of Maldives, Mr Latheef worked very hard in developing Volleyball in Maldives and the region. He organized many local and international competitions to develop and promote Volleyball activities in the region.