Lausanne, Switzerland, May 8, 2019 – The International Volleyball Federation (FIVB) has released the entry lists for this year’s Beach Volleyball U21 World Championships that will take place in Udon Thani, Thailand from June 18-23.

Buenos Aires Youth Olympic Games podium finishers – gold medallists David Ahman and Jonathan Hellvig of Sweden, silver medallists Matthew Immers and Yorick De Groot of the Netherlands and bronze medal winners Mauro Zelayeta and Bautista Amieva of Argentina will all be present to compete, while women’s gold medallists Mariia Bocharova and Maria Voronina of Russia will lead the field of women’s teams in the 2019 edition of the U21 World Championships and attempt to win another title after claiming gold at U19 World Championships in 2018.

Fifty-eight teams from 47 countries are entered in the men’s tournament, while 55 teams from 43 countries will compete in the women’s category this year.

In the previous edition of the U21 World Championships, the Brazilian pairs outplayed their Russian counterparts to claim the top podium spots in the men’s and women’s tournaments.

WOMEN’S 2019 VNL: THE TALLEST, THE YOUNGEST, THE RECORDS TO BEAT 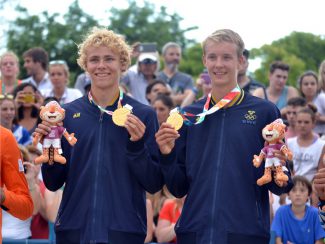