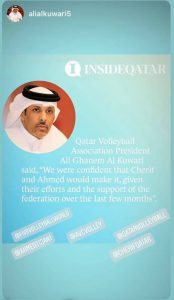 In a statement, the FIVB said that 13 teams have guaranteed direct qualification for the 2020 Olympic Games after the end of the last three Olympic qualifying rounds in Mexico.

The FIVB’s statement indicated that there is another opportunity to qualify directly to Tokyo, as three teams are coming in the positions from 14 to 16 that need to strengthen their ranking to qualify directly to the Olympics by participating in the last two tournaments of the Olympic qualifiers at the Sochi Tour in Russia in May and the Ostrava Tour in the Czech Republic in June.

The Qatar’s first beach volleyball team, consisting of Cherif Younousse and Ahmed Tijan, came in the seventh position in the world with 5,280 points, according to the latest FIVB ranking, and in fifth place in the provisional Olympic ranking.