Bangkok, Thailand, January 9, 2021 – Determined Qatar SC faced no issues in shutting out Al-Gharafa in comfortable straight sets in the 13th round of the Qatar Senior Men’s Volleyball League at QVA Hall on Friday, volleyball.qa reported on Saturday.

Qatar SC proved too strong for Al-Gharafa to pull out a convincing 25-15 25-13 25-22 win over the rivals, helping the former surging to the second place in the overall league standings with 30 points. Reigning champions Police remained unbeaten atop the standings with 36 points, with Al-Arabi in third place. Al-Gharafa collected 8 points.

The competition continues on Sunday, with Al-Khor taking on Al-Wakra in the first match at 4pm local time, followed by the highly-anticipated encounter between Police and Al-Rayyan at 6.30pm. 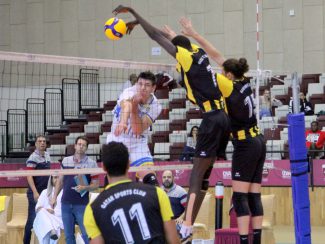