In particular, the performance of Team Qatar at this year’s Olympic and Paralympic Games Tokyo 2020 was highlighted as the best-ever in the nation’s sporting history. Qatar took home four medals in total, two gold and two bronze, including Cherif Younousse and Ahmed Tijan who won Qatar’s first beach volleyball Olympic medal by beating Latvia’s Martins Plavins and Edgars Tocs in the bronze-medal match.

For their incredible Olympic journey and elite performance throughout this year’s FIVB Beach Volleyball World Tour, Younousse and Tijan were honoured with the Men’s Team of the Year Award at the QOC Sports Excellence Awards. 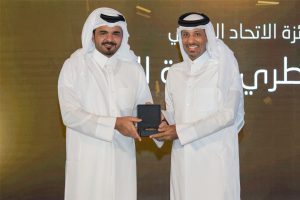 Meanwhile, the QVA was awarded the Golden Federation Award alongside the Qatar Athletics Federation and Qatar Weightlifting and Fencing Federation. The QVA has continued to promote and develop volleyball and beach volleyball in the country, in addition to hosting international events such as the Katara Beach Volleyball Cup. Qatar is also set to host the King of the Court Crown Series finals at the Aspire Zone early next year. 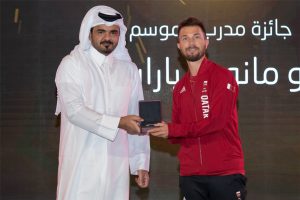 The full awards list can be found at www.olympic.qa/index.php/media-center/qoc-celebrates-new-chapter-achievements-sports-excellence-awards