The competition kicked off at sharp 8am in the women’s event to avoid the scorching heat at mid-day, with second women’s matches being held in the afternoon session. The men’s teams began their main draw campaign at 2pm as temperatures hit up to 32-35 degrees Celsius, but the conditions did not deter all participating teams giving their bests in the highly-anticipated clashes. 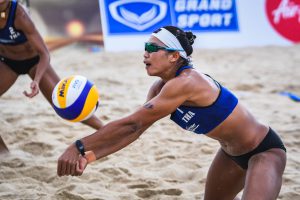 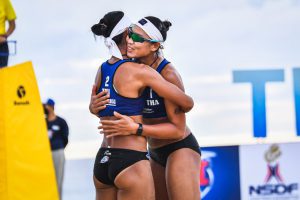 “I’m very exhausted playing two matches on the opening day. I think we did our best in the second match against the Philippines. It took one and a half years that we split to play with new partner and this is for the first time that we played together again,” Varapatsorn said after the second win against the Filipinas.

“Frankly, the Philippines came up much stronger this time. We cannot underestimate them. They put us in much trouble, especially in the second set. Both wins on the first day have boosted confidence in our team. However, tougher tasks await us in the next two days when we have to take on strong Kazakhstan and Australia. We will try our best,” Thanarattha said. Second seeds JPN 1’s Miki Ishii/Sayaka Mizoe also had a remarkable run with two wins in a row in Pool B. Miki with regular partner Megumi Murakami picked up bronze medal at the 2020 edition and silver medal at the 2018 Asian Games in Indonesia, but teamed up with Sayaka for the first time in the Asian Championships here in Phuket. 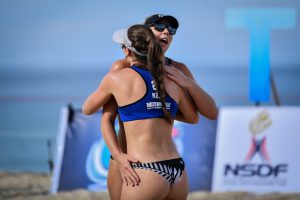 The Thai tandem earlier suffered their first lost 19-21, 17-21 at the hands of NZL’s Shaunna Polley/Alice Zeimann, who last month headed to Europe including Portugal and Czech Republic in an effort of qualifying for the 2022 Commonwealth Games in Birmingham, winning the FIVB One-Star event in Cortegaca, Portugal. 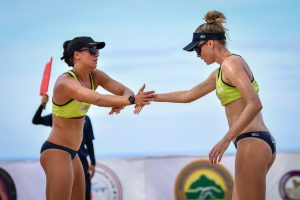 Only AUS 3’s Alisha Stevens/Jana Milutinovic failed to make their mark following their 19-21, 17-21 loss to JPN 3’s Asami Shiba/Takemi Nishibori in Pool D. The Australians later suffered their second loss when they went down to THA 2’s Taravadee Naraphornrapat/Kongphopsarutawadee Worapeerachayakorn 18-21, 11-21. Stevens made much of the impact early this year as she partnered Stefanie Fejes to sweep both Asian U19 and U21 crowns on Thai soil. In the men’s event, Qatari second seeds Ahmed Tijan/Cherif Younousse, who clinched bronze medal at the Tokyo 2020 Olympic Games, the first Olympic medal for Qatar and the first-ever beach volleyball medal in the Arab world and Asia since the Olympic beach volleyball debut in 1996 in Atlanta, lived up to their billing. Contesting Pool B, the superb duo demolished THA 4’s Poravid Taovato/Pithak Tipjan 21-15, 21-19 in 37 minutes. Ahmed and Cherif had already captured the Asian title for two times in a row in 2018 in Thailand and 2019 in China aside from winning the Qatar’s first beach volleyball gold in the 2018 Asian Games in Indonesia. The Qataris will next take on KAZ 2’s Alexey Sidorenko/Kirill Gurin on Wednesday. 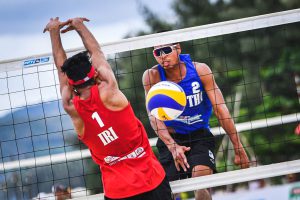 A total of 42 teams (23 men’s and 19 women’s teams) from 10 countries comprising Kazakhstan, Japan, Iran, Australia, Qatar, Singapore, Sri Lanka, Philippines, New Zealand and hosts Thailand are competing in the five-day Championships, vying for not only top honours, but also cash prizes of US$30,000 in total and AVC points. 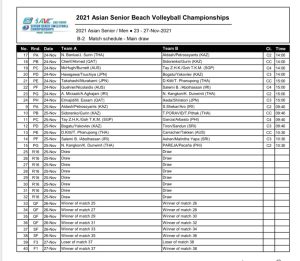