Qatar’s Cherif Younousse and Ahmed Tijan and USA’s Jake Gibb and Tri Bourne secured their spots in the knockout stages of the men’s Olympic beach volleyball tournament by putting their hands on the top two places in the Pool C standings on Wednesday.

The new FIVB World Ranking leaders, Cherif and Ahmed, were trailing Italy’s Adrian Carambula and Enrico Rossi for the better part of the first set in the match between the two teams, but in the end they managed to deny four opponent set points before snatching the set deep into overtime. With the momentum on their side, the Qataris had complete control of the second set to cruise on to a 2-0 (24-22, 21-13) victory.

“The match was great! It was a little bit tough in the first set and we almost lost it. But we kept on fighting until the end, until we were able to take over. The second set was normal and the victory came to us,” Ahmed told Volleyball World.

“Now we will focus on finishing top of the pool and then the real fight starts,” said Cherif. 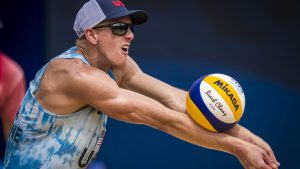 To finish on top of the pool, the Qatari pair will have to overcome the resistance of Gibb and Bourne, who also enjoy a 2-0 win-loss record before the third leg. Earlier on Wednesday, the Americans claimed a hard-fought 2-0 (21-19, 23-21) victory over Switzerland’s Adrian Heidrich and Mirco Gerson. The Swiss and the Italians will have to fight it out for the third place in the pool.

“I would give us a B minus,” Gibb said after their match. “I think we’re both playing good volleyball and hopefully we start gelling a little bit more. But we’re increasing. That went from a C plus to a B minus. It’s a slow increase and, you know what, it’s a slow climb. But I think we’re getting better.”