Bangkok, Thailand, May 24, 2021 – Qatar’s Tokyo Olympics hopefuls Cherif Younousse/Ahmed Tijan will be out to prove their talents in the main draw of the FIVB Beach Volleyball World Tour Sochi in Russia between May 26 and 30, 2021, with 50 teams from 22 countries vying for the top honour in the 4-star event.

In the Sochi event, the Qataris, who are currently ranked 7th in the FIVB world ranking with 5,280 points, according to the latest classification of the FIVB, have already made it to the main draw

Cherif and Ahmed are looking forward to progressing in the world rankings of national teams through their participation in the FIVB World Tour Sochi and Czech Ostrava rounds, before their next participation in the Tokyo Olympic Games, as the world’s governing body has recently announced on its official website that 13 teams guaranteed direct qualification for the Olympiad in Tokyo, where the Qataris come in 5th position in the provisional Olympic ranking. 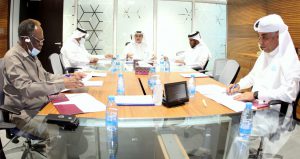 The Competitions Committee of the Qatar Volleyball Association on Sunday evening held a meeting, chaired by QVA Secretary General Youssef Ahmed Kano and Assistant Secretary Saeed Salem Al-Jamani, with Members Mubarak Eid Al-Abdullah, Ibrahim Mohammed Al-Nama and Technical Expert Hussein Imam attending to discuss the presentation of proposals and visuals on amendments to the list of volleyball competitions for the new season 2021-2022.

VNL 2021: WOMEN ON THE STARTING LINEISHII AND MURAKAMI SELECTED TO REPRESENT JAPAN IN TOKYO