The 2021 FIVB Volleyball Nations League is a competition like no other.

With the women’s event starting on Tuesday at Italy’s Adriatic resort of Rimini, it marks the restart of world volleyball with an event that has fans across the globe in anticipation and excited to finally see some action.

And the action could be no better than the gathering of the world’s top 16 nations for a month of high drama that is sure to keep everyone on the edge of their seats.

USA, the only team to have won the trophy in the first two editions of the event, are back again and as strong as ever to defend their back-to-back titles of 2018 and 2019 with experienced captain Jordan Larson leading a squad packed with stars.

This includes both the MVPs of the previous editions – Michelle Bartsch-Hackley from 2018 and Annie Drews from 2019, plus a host of Olympic and World Championship medallists.

Alongside them will be middle blocker Haleigh Washington and libero Megan Courtney, both of whom had been named on the Dream Team of 2019, plus middle blocker TeTori Dixon from the 2018 Dream Team.

All in all a very fearsome and formidable lineup. 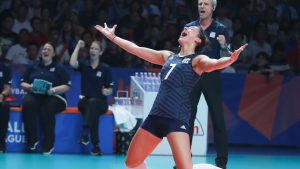 Lauren Carlini ecstatic, after helping USA to their second VNL title, in 2019. Can USA live moments like this again this year?

But the 2019 finalists Brazil are also coming to Rimini with a powerful side that can challenge USA again.
Setter Macris Carneiro from the 2019 VNL Dream is in Rimini – though she would be contending with Roberta Ratzke for a spot in the starting lineup.

And spearheading the attack to bring in the points should be outside hitter Gabi Guimaraes and middle blocker Ana Beatriz ‘Bia’ Correa, both also from the 2019 VNL Dream Team. 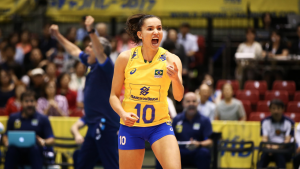 Gabi Guimaraes, an outside hitter of the 2019 VNL Dream Team, is in Rimini to help push Brazil a step up this year.

But keep an eye out for Turkey, also fielding a very strong side and headed for the medals round, as well as Russia who have not fared too well internationally as of late but are out this year with all the might their experienced stars such as Nataliya Goncharova and Tatyana Kosheleva can muster.

Alongside those will be a wealth of younger, budding stars out to prove themselves in front of a world audience so look out for 17-year-old outside hitter Ana Cristina Souza of Brazil and opposite Arina Fedorovtseva of Russia – to name just two.

And the whole squads of Serbia and Italy will inject young blood in the competition, providing a unique insight on what the future holds for these powerhouses of world volleyball.

The logistics
Competition will be held at specially modified pavilions of the Rimini International Fair, within which two playing courts plus a number of warm-up areas and training facilities have been set up – all inside a secure ‘bubble’ to minimise any health risks.

All teams will compete three days on with three days off to complete their 15-match obligations in the single round robin pool.

Unlike the previous editions, there is no Final Six this year. Instead, the top four teams in the standings after completion of pool play will meet in crosswise semifinals, followed by the two medals matches.

In an effort to keep numbers of participants to a minimum and reduce contacts, for the safe being of all participants, this year there will be no spectators and matches will be played without line judges and ball retrievers. Delegations are capped at a maximum of 25 persons, including players and staff – though a change of up to six persons will be possible midway through the tournament on 9 June (12 June for the men).

The move will be highly anticipated, as some of the big guns that will sit out the first half of the tournament may well be coming in for the final push to the medals round.

But of course, all the thrilling action that a VNL can bring will be available on volleyballworld.tv https://www.volleyballworld.tv/home with live coverage of matches, and all the latest will be transmitted throughout the world on our social media and also right here on this website.

Of the registered players inside the ‘bubble’ teams can select a maximum of 14 for each three-match segment of the competition.
The logistics in bringing this VNL together while at the same time ensuring the well-being and health of all involved have been immense.

But in a world that’s endured lockdowns, restrictions and quarantines for well over a year now, not to mention the pain and suffering for all those that have been taken ill or lost loved ones, this VNL is certainly a huge glimmer of hope.