ISHII AND MURAKAMI SELECTED TO REPRESENT JAPAN IN TOKYO

The top-seeded pair in the six-team tournament that took place at the Dome in Tachikawa City, Tokyo, Ishii and Murakami secured the right to represent their country at the upcoming Olympics after they defeated Chiyo Suzuki and Yurika Sakaguchi 2-0 (21-16, 21-12) in the final.

The tournament went full circle for the 31-year-old Ishii and the 35-year-old Murakami as they had lost to Suzuki and Sakaguchi in the first round before meeting them again in the final.

“We formed the team with the goal of qualifying for the Tokyo Olympics,” Murakami commented. “The Olympics are just two months away now and we want to show the world all we have worked on in practice.” 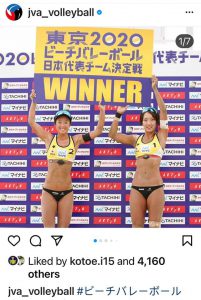 Ishii and Murakami are currently the top-ranked Japanese team in the FIVB World Ranking at the 32nd position. They have been playing together on the FIVB World Tour since 2015, when they first tried to qualify for the Olympics. They won gold at a one-star event in Daegu in 2017, silver at a two-star tournament in Zhongwei in 2019 and bronze at a three-star in Tokyo in 2018.

“We want to win a medal at the Olympics,” Ishii added. “We know it’s a difficult thing to accomplish, but we’re confident that people will be able to see how hard we’ve been working for it. It will be a great experience for our team.”

The Japanese Volleyball Federation will run a similar tournament to determine which men’s team will represent the country at the Tokyo Olympics from June 5-6.