Taking the number of Japanese players in the Lega Pallavolo SuperLega to three, Kioene Padova announced on Monday that Japan outside hitter Ran Takahashi will join the club next week.

Following in the footsteps of compatriots Yuki Ishikawa (Allianz Milano) and Yuji Nishida (Tonno Callipo Calabria Vibo Valentia), Takahashi expressed his wish to join the Italian league earlier this year. His wish becomes a reality as he prepares to join the team based in Padua, in Italy’s Veneto region, who currently sit in eighth place in the league standings. He joins other international players at the club including Eric Loeppky of Canada, Germans Jan Zimmermann and Linus Weber and Bulgarian Georgi Petrov. 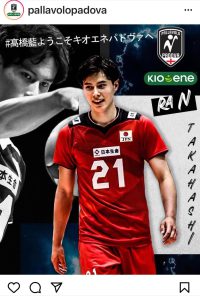 Japan’s rising star helped his country reach the Tokyo 2020 Olympic Games quarterfinals for the first time in 29 years this summer, and has participation at the Olympic Games in Paris in 2024 at the top of his priorities. The young outside hitter turned 20 on September 2 and joins Kioene Padova after playing for Nippon Sport Science University in his home country.

Watch all matches of the Italian men’s and women’s leagues, live or on demand, on Volleyball TV.